Police, residents standoff at Aroaima over removal of river blockade 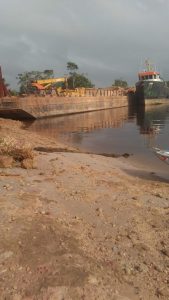 Following nearly two weeks of industrial action by Russian Aluminium (RUSAL)-controlled Bauxite Company of Guyana Inc. (BCGI) workers, police and residents, at Aroaima, are now in a standoff over efforts by lawmen to remove the blockade of the Upper Berbice River, police said.

Police on Wednesday swooped down on the area and removed ropes and drums that angry workers and residents used to block the waterway for almost two weeks to protest the layoff and eventual dismissal of 326 workers.

Region 10 Divisional Police Commander, Superintendent Hugh Winter said two utility poles were burnt overnight, but no one has been arrested. He said more ropes and drums were used to again block the river and when police returned to the area Thursday they were faced with women, children and bauxite workers.

“Persons are there but we don’t want to aggravate the situation,” Winter told News-Talk Radio 103.1 FM/Demerara Waves Online News.

Government’s Department of Public Information quoted Chief Labour Officer, Charles Ogle as saying that RUSAL-BCGI paid the sacked workers severance and other entitlements. “We were advised that all outstanding benefits were paid over to the workers,” Ogle revealed to media operatives.

Ogle said the company was asked to provide details about the payments to ensure they are correct. “They are to submit to us the breakdown so that we can calculate and confirm that the terminal benefits are accurate,” the senior labour officer emphasised.

The Chief Labour Officer said the Guyana Bauxite and General Workers Union (GB&GWU) has agreed to assist with clearing the river where bauxite and equipment are transported. “We would have adjourned the meeting but the Union, on the other hand, undertook to facilitate the unblocking of the river,” he explained.

Meanwhile, consultant Francis Carryl said the union has indicated that they will detail in writing by midday tomorrow, what they wish to achieve at the completion of the engagements. “They are looking for somethings that are not yet identified. When we get that written request, which we will have to discuss further, we will know exactly how to move forward,” Carryl noted.