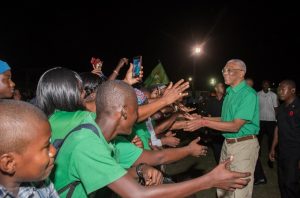 After being diagnosed with non-Hodgkin’s lymphoma, a type of blood cancer, more than a year ago, President David Granger’s doctors in Cuba say he is in good health and there is no sign of cancer.

The President completed a follow-up medical evaluation in Havana, Cuba, on January 20, following a previous evaluation in October, 2019 which revealed that his cancer was in remission.

The Ministry of the Presidency says Cuban medical specialists confirmed that the President’s medical examination shows that he has improved to their satisfaction and that he is in good health.

The specialists say the President has responded very well to the treatment at the CIMEQ medical centre where he has been receiving treatment and that his diagnosis of non-Hodgkin’s lymphoma remains in remission. That means no cancer cells have been found.

Recently the President’s health has become a campaign topic with the opposition People’s Progressive Party (PPP) calling for the release of his medical records.

PPP General Secretary Bharrat Jagdeo had questioned the President’s fitness to lead Guyana and the incumbent APNU+AFC coalition into the March 2, 2020 general and regional council elections.

President Granger was on the campaign trail for the coalition appearing at several rallies with his last in Region 5 (West Coast Berbice) before his departure for Cuba.

The President leaves Cuba for Guyana on Tuesday. He is on Wednesday expected to commission a new magistrates court on the East Bank Demerara.