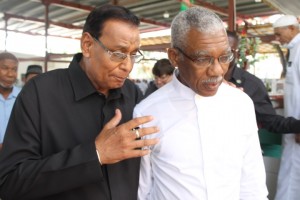 President David Granger has been diagnosed with Non-Hodgkin Lymphoma, a cancer that starts in the white blood cells, and he on Wednesday began  a second round of treatment in Cuba where he has been for the past two weeks seeking medical attention.

“Subsequent to a series of medical tests, the President was diagnosed as suffering from Non-Hodgkin Lymphoma and was placed in the Centro de Investigaciones Medico Quirurgicas (CIMEQ) on Thursday, November 1, where he underwent a surgical procedure,” Guyana’s Ambassador to Cuba, Halim Majeed said in a statement.

“The President’s medical personnel has now begun the second phase of treatment today, Wednesday, November 14, 2018, and he is likely to be placed in CIMEQ for a short period of two to three days,”  Majeed added.

Non-Hodgkin Lymphoma is a cancer that starts in white blood cells called lymphocytes, which are part of the body’s immune system. Experts say the recovery rate is usually very high, but the cancer can be either indolent or aggressive. Factors include age, gender and the patient’s immune system.

The Guyana Ambassador said Granger is “in a good frame of mind” and “working and resting in accordance with the advice he has been receiving from his doctors”.

After meeting with his medical doctors in Trinidad about one week earlier due to a “physical discomfort”, the President left for Cuba on October 30, 2018 and the following day was “placed in the” CIMEQ where he “underwent a surgical procedure” and discharged on November 6,” Majeed recalled.

Majeed said the President expressed his “deep gratitude to Guyanese in the Homeland and in the Diaspora, to the various Prime Ministers and Presidents, to the CARICOM Diplomatic Caucus in Cuba, to his friends and colleagues, and all those who sent their best wishes for his full and complete recovery – and his speedy return to Guyana.”

The President reportedly would like to publicly thank the President of the Republic of Cuba, the Government of Cuba, and the medical staff of CIMEQ for the “special care and attention which he has received while in Havana – and, indeed, for the excellent facilities in which he is being accommodated.

The President was officially due to return on November 11, but that has since been evidently pushed back. No new date has been announced.