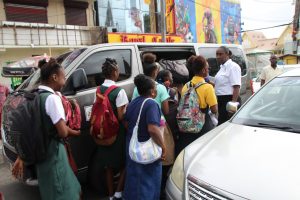 A welfare department official supervises children boarding a bus to take them to school.

The Ministry of Education’s Schools Welfare Department is clamping down on students loitering at the bus parks in the vicinity of the Stabroek Market.

Chief Schools Welfare Officer (CSWO), Gillian Vyphuis says that the welfare department has noticed that on most mornings many children have been arriving at school late due to lingering at city bus parks.

She says several students who were found loitering and those that were actually tardy, were rounded up and placed in buses to get them to school.

Ms. Vyphuis says the campaign by her department started this term and has continued everyday, resulting in a marked decrease in the number of students loitering. 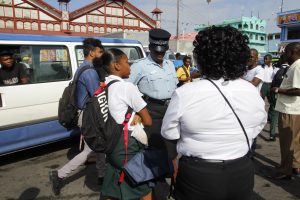 The CSWO calls on parents to instill in their children the discipline of attending school daily and on time.

Ms. Vyphuis says the welfare department will transfer students who are habitually late to schools closer to where they live for punctual attendance and the benefits of more classroom hours.