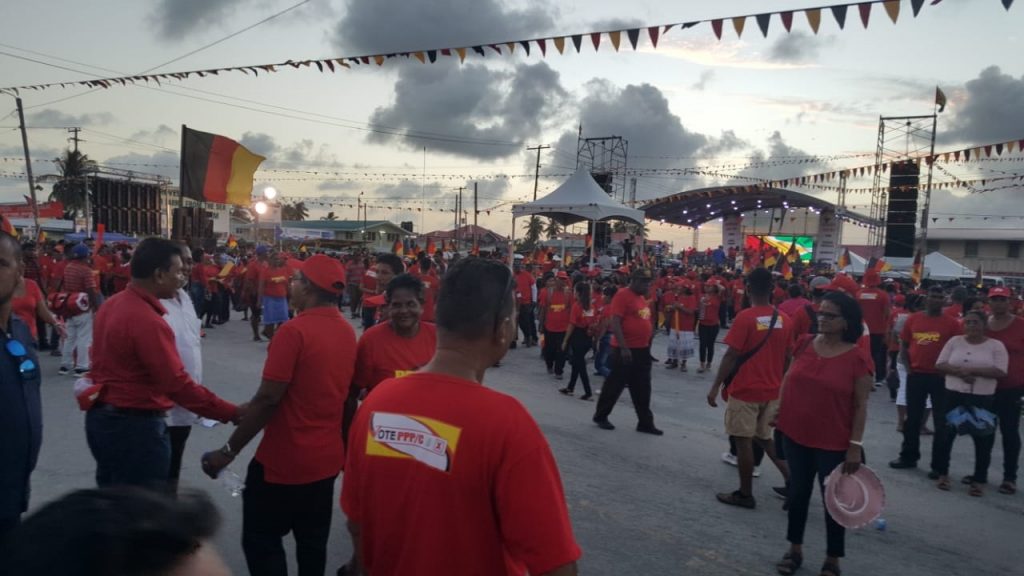 A section of the attendees at the People’s Progressive Party Civic rally at Anna Regina, Essequibo Coast.

The opposition People’s Progressive Party Civic (PPPC) on Saturday hammered the incumbent coalition’s failed 2015 elections promise to deliver GYD$9,000 for a bag of rice, even as it churned out promises to solve crime, poor internet access and other woes facing its Essequibo Coast stronghold.

PPPC presidential candidate, Irfaan Ali said fighting crime would have to be addressed strategically to counter internal and external threats by high-tech criminals who are targeting Guyana. “We have to ensure that we build a system that will cater for new and innovative crimes because, while investors are looking at Guyana, as a new destination to invest the sophisticated criminal is also looking at Guyana as an area for opportunity so our crime system must be built on a platform that is built to respond to the present situation but it also must take the potential threats of the future and be able to react and respond proactively to that threat,” Ali said.

Ali said the anti-crime strategy would require greater community involvement, intelligence-led approaches, build a regional security system that is run as far as possible by people from the regions, use technology to identify crimes before they are committed, reform, training, retooling and private-public security partnerships. “We have many private security firms operating but they are all operating in ad hoc manner. We have to look at ways in which we can bring the private sector with the public sector as we develop and we work on a holistic crime-fighting strategy for our region,” said Ali.

Between 2002 and 2008, the then PPPC administration had been accused of turning a blind eye or facilitating death squads and drug traffickers in crime fighting as well as permitting the purchase of sophisticated mobile telephone interception and location technologies.

He said 30,000 jobs have been lost since 2015, leading to increased school-drop outs. Reiterating the PPPC’s promise to generate 50,000 jobs, the PPPC presidential candidate said if his party is voted back into office on March 2, 2020 it would improve internet access and reduce the cost of data by as much as 50 percent as part of an overall strategy to create more jobs in information communication technology (ICT), deliver public services in all ten administrative regions and expand education delivery. The PPPC presidential candidate said not only education would be free but 20,000 scholarships would be granted. “When we build the future, when we examine what would be the needs in every single field of development, we can have young people…benefitting from these scholarships so that in the medium term, we’ll be able to train all the doctors, the engineers, the scientists, every single field of development that our country requires to transform,” he said. Ali said the future includes reducing the cost of education by allowing people to pursue studies by distance education, and the construction of more secondary schools.

In the area of agriculture, the PPPC presidential candidate acknowledged that rice is very important to Region 2 even as he promised to remove the charges on drainage and irrigation and return incentives to farmers to allow them to reduce costs of production and increase their profits.

Ali said his administration would search for new, sustainable and viable rice markets while reducing taxes on equipment and assisting them whenever there is destruction by paddy bugs. “When you suffer because of paddy bug, we are going to give you back help with seed paddy and other help like fertiliser to put you back to the crop,” he said.

Ali said low-cost financing, technical and extension services, and a rice stabilisation fund to “help the farmers in hard times” would be examined.

New lands in Region 2, he promised, would be opened up for agriculture.

Phillips, and PPP General Secretary Bharrat Jagdeo assailed the Granger-led coalition for fooling rice farmers that they will ensure they earn GYD$9,000 per bag of paddy on the 2015 election campaign.