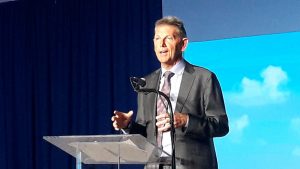 The first one million barrels of crude oil produced in Guyana is about to leave aboard a tanker for an ExxonMobil refinery where impurities and contaminants will be removed to set a standard for oil being produced from the Liza well located offshore, officials said.

“There was also this great, big tanker that tonight (Friday)/tomorrow (Saturday) is going to load a million barrels, the first export from Guyana,” President of ExxonMobil Upstream Oil and Gas, Liam Mallon said to resounding applause at a reception to celebrate Guyana’s first oil.

Guyana has already agreed to sell its first three million barrels of crude to Shell which will conduct similar processes to hopefully arrive at a Liza standard on the world market. Guyana’s oil will be sold based on Brent crude price.

The oil is being produced at the Liza Destiny, a floating, production, storage and offloading vessel. Mallon said there are four other drilling vessels and a fleet of 20 support vessels.

Mallon said if ExxonMobil had performed on average, Guyana would have begun producing oil in 2024 because “the average time in water of this depth from discovery to first oil is nine years; this was done in five” years safely and “below the cost we expected when we first started.”

Mallon said investors “put significant money on the ground” to invest in two wells, a rarity, and contractors such as TechnipFMC, SBM Offshore “significantly exposed themselves to financial risk on the basis that we would make this happen.”

Acting Prime Minister, Khemraj Ramjattan credited the oil find to ExxonMobil, calling the company “the bravest, the most technologically driven with a record of durability second to none in the industry.” He said preparations for first oil has seen Guyana creating eleven regulations and guidelines including the Natural Resources Fund Act, crude lifting agreement, customs procedures, and a draft local content policy. “These important documents of policy and law support all stakeholders in order to realise certainty and the best value for the people of this great nation in the shortest possible time,” he said.

The opposition People’s Progressive Party (PPP) did not attend the celebratory event at the Marriott Hotel. Instead, PPP General Secretary and Opposition Leader, Bharrat Jagdeo and several party associates were downstairs at the hotel bar as invitees were leaving.