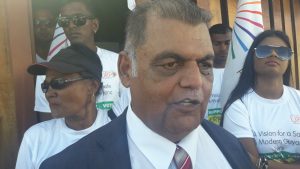 The fate of the candidacy of the leader of the United Republican Party (URP), Dr Vishnu Bandhu hangs in the balance as the Guyana Elections Commission’s (GECOM) Chief Elections Officer, Keith Lowenfield has already stated that candidates must be Guyanese citizens only at the time of declaration on Nominations Day.

Lowenfield has already said the seven-member commission would decide the action to be taken against persons who declare that they are only Guyanese. “GECOM, understanding what occurred historically, will be moving to ensure that in 2020, going forward, that there is an action to be taken by us because you have submitted to us that says ‘I am bona fide’,” Lowenfield said.

The law provides for a one-year imprisonment for anyone who makes a false declaration.

Dr Bandhu Wednesday afternoon said he remained his party’s presidential candidate, despite still being a Guyanese-American. He says he and his team met with the GECOM regarding his candidacy where he learnt the commission was not responsible for what he considered lies by the media.

GECOM spokeswoman, Yolanda Ward told News-Talk Radio Guyana 103.1 FM/Demerara Waves Online News that Bandhu wrote GECOM stating that “he is in the process of renouncing his US citizenship and he should have that approval within a few weeks.”

She said Bandhu never indicated that he has withdrawn his candidacy for the March 2, 2020 general and regional elections.

The URP presidential candidate, speaking at the launch of his party’s manifesto, stated that he remains the presidential candidate of the party despite being a dual citizen. Bandhu said GECOM representatives on Wednesday told him that they were not responsible for lies reported in the media.

Dr. Bandhu says the US Embassy in Guyana has assured him that his application to relinquish his US citizenship would be processed and completed swiftly. “They discussed my matter in their Board meeting because I have submitted a letter to them. I sent them a letter stating that I am withdrawing myself from being a US citizen. Next three weeks, the US embassy promised me that all the paper work will finish and I will not be a US Citizen anymore,” he said.

Leader of the Liberty and Justice Party, Lenox Shuman is also apparently at the same stage as he said that he has applied to renounce his Canadian citizenship and he was awaiting a response. He has assured that, if elected to the National Assembly, he would be taking up his seat in full compliance with Guyana’s constitution.

The Guyana High Court and Court of Appeal have stated categorically that holders of dual citizenship cannot be candidates or parliamentarians, stemming from a case that had challenged the validity of the no-confidence motion that had been passed with the vote of then government parliamentarian, Charrandass Persaud, a Guyanese-Canadian.

In keeping with the ruling, government parliamentarians Carl Greenidge, Rupert Roopnaraine, Dominic Gaskin and Joseph Harmon had resigned from Parliament and appointed in senior government positions. Greenidge and Gaskin, as well as opposition politician Gail Teixeira, have said they have renounced their foreign citizenships.

Gaskin was born in the United Kingdom and Roopnaraine is not a candidate.