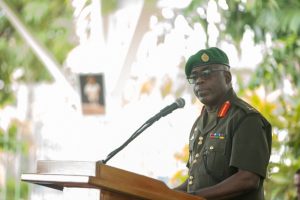 The Guyana Defence Force (GDF) is asking for money to buy helicopters and boats to meet the challenges of an oil and gas state, even as President David Granger says the country’s oil-rich maritime zone faces a serious threat.

“As the force continues this transformative process, ocean patrol vessels for the coast guard are necessary, helicopters for the air corps and more off-road vehicles are also necessary to ensure that as a force we have the capabilities that are required to support an emerging oil industry,” Chief of Staff of the GDF Brigadier Patrick West said at the opening of the 2020 Annual Officers’ Conference.

He promised that the GDF would take all steps to respond to security issues related to the oil and gas sector. “Now that the country is an oil-producing nation, the force must be better poised to handle some of the challenges that will arise and will do its best to maintain safety and security in this changing environment,” Brigadier West said.

Brigadier West says the army was better in 2019 than in previous years, but there is a need for more investments in education, equipment and incentives in order to position the GDF to perform better in 2020. 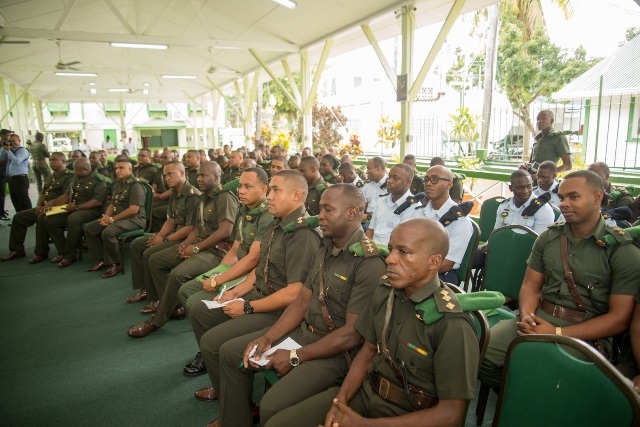 GDF Officers at the opening of the 2020 Annual Officers Conference at Baridi Benab, State House.

The Chief of Staff made the remarks in the presence of, among others, Commander-in-Chief, President Granger who told the conference opening that the GDF has a major role to play in confronting the threat of scaring away investors from Guyana’s oil-rich maritime zone. “The interruption of economic activity in the country’s exclusive economic zone (EEZ) has been a grave threat in the recent past. The country’s maritime zone now is the scene of a surge of economic activity; petroleum production has commenced and exploration is continuing. The EEZ must be protected from illegal incursions aimed at the intimidation of investors or interference with production,” Granger said.

Other “formidable threats” facing Guyana, according to President Granger, are criminal threats to fisherfolk whose sector contributes to the national economy and food security. “The country’s fishing grounds, and those who are employed in it, must be protected,” he added.

Granger said illegal miners from other states have entered our territory, occasionally, to exploit Guyana’s mineral resources “unlawfully and steal our wildlife,”occurrences he wants the GDF to help stamp out. “Incursions into our territory by illegal miners and wildlife raiders must be resisted in order to protect our natural resources. Criminal gangs, known as ‘sindicatos’, have been known to invade mining camps, blockade rivers and commit murders. The country’s frontier communities and their residents are vulnerable to attacks from these armed gangs,’ he said.

Natural hazards such as floods and drought which inflict destruction, distress and death, the President said, are another threat facing Guyana. “Natural hazards can degrade our natural capital and result in the costly damage to the environment and public property. Both the coastland and hinterland have been affected,” he added.