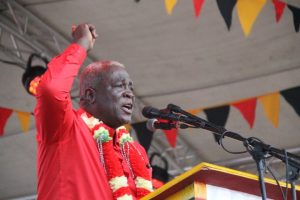 The prime ministerial candidate for the People’s Progressive Party (PPP), Retired Brigadier Mark Phillips on Sunday fired back at General Secretary of A Partnership for National Unity (APNU), Joseph Harmon for suggesting he is a token Black because he is on the PPP’s slate.

Addressing thousands of supporters at a rally in Albion, Corentyne, Berbice, Phillips said everyone is free to support any political party of his or her choice.

“Harmon, if we are to follow his reasoning, he is telling you that all non-Africans on the coalition are mere tokenism and we don’t believe that. We believe everybody has a right to support which party they want to support,” said Phillips about the Afro-Guyanese dominated coalition of the People’s National Congress Reform-led A Partnership for National Unity (APNU) and the Alliance For Change (AFC). Incumbent Prime Minister Moses Nagamootoo and coalition prime ministerial candidate, Khemraj Ramjattan are Indo-Guyanese.

The PPPC is supported mainly by Indo-Guyanese.

The prime ministerial hopeful says joining the PPP and running for office is causing fear in the coalition camp.”The coalition is desperate and running scared,” he said. “Harmon is worried. He is very worried and desperate because we in the PPP don’t just speak about racial harmony and racial unity. We in the PPP lead by example,” said Phillips in a relatively fiery speech for a political newcomer. He said the PPPC’s list of candidates represents youths of all races. “It is a truly national list. It is a winning list, comrades” he added

The Retired Brigadier said he out-matches the many brigadiers, admirals, colonels and a Commissioner of Police. “This one Brigadier comes out of retirement and joined the PPPC and they are running scared,” he said.

Phillips quipped that he would once again have to use his ‘war name’, “Super.” “I’m taking back my war name. I am the Super for the PPPC,” said Phillips a former Chief-of-Staff of the Guyana Defence Force (GDF).

Meanwhile, the PPP on Sunday appealed to thousands of party supporters, targeting their emotions.

Several speakers indicated that life is now worse off than in 2015 when the PPP lost power to the David Granger-led coalition.

They cited the closure of several sugar estates that led to hunger, unemployment, increased crime and severe shortage of basic medicines and no cataract surgeries at the Port Mourant Ophthalmology Centre.

Previous: Nigel Hinds withdraws as Change Guyana candidate because he needs his US citizenship for medical reasons
Next: PPPC’s Mark Phillips, APNU+AFC’s Winston Jordan differ on bonus for joint services