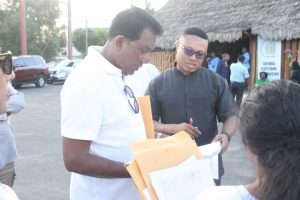 GECOM’s Duarte Hetsberger explains to Chandra Sohan of FED-UP that he needs to submit more candidates for regions 5 and 6.

Several small political parties that have emerged within the past year will be contesting the March 2020 general elections individually as efforts to coalesce collapsed.

A New and United Guyana (ANUG) and the Federal United Party (FED-UP) submitted several lists of candidates to the Guyana Elections Commission (GECOM) on Friday, one day after FED-UP had disclosed that they had agreed on a presidential candidate, name and symbol.

But ANUG presidential candidate, Ralph Ramkarran turned up Friday afternoon with a small number of party supporters to submit his list, followed by FED-UP’s Chandra Sohan and his team to submit their party’s list of candidates several hours later. Sohan’s delegation ran into some temporary difficulty because the party did not submit enough candidates for Region 5 (Mahaica-West Berbice) and Region 6 (East Berbice-Corentyne). Eventually, Sohan resubmitted his documents and later said all was well.

Ramkarran explained that the reason for ANUG and FED-UP not making it to the finishing line together as one party was “the large, voluminous mass of documents have to be filled” and “we were unable to merge them on time.” Ramkarran said ANUG had only one person to conduct the “massive, monumental job.” While the two parties have not formally submitted documents jointly to GECOM, he said they have agreed to work together and ANUG would be contesting in Region 6.

Sohan later acknowledged that efforts by ANUG and FED-UP to contest as one entity have “collapsed” “That has collapsed, yes….I don’t know for sure what to tell you on that…I would say in a matter of hours,” he said. Sohan refuted Ramkarran’s claim that ANUG and FED-UP could not submit a joint list of candidates because it was a lot of work. “I do not believe that is the case,” said Sohan, a former magistrate.

The Citizenship Initiative (TCI) said it did not reach accord with Change Guyana, although there had been cautious optimism that the two would have brokered a deal overnight. However, TCI executive member, Ruel Johnson said “time ran out” on a plan to build individual brands before coalescing.