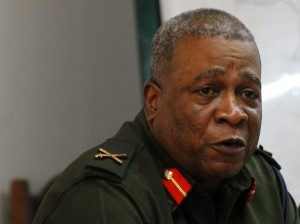 The PPP highlights Mr Phillips’ “long and distinguished career” of four years in the GDF, culminating with his appointment as the 8th Chief-of-Staff from September, 2013 until he retired in October, 2016.

The party notes that throughout his tenure, Mr Phillips’ “consistent upward mobility clearly demonstrated that he acquitted himself with distinction in every position held.”

Mr Phillips received military training, certification, and many accolades locally, as well as in the Caribbean, South America, Central America, the United States of America, Canada and the prestigious Royal Military Academy Sandhurst in the United Kingdom.

Academically, Mr Phillips possesses a Bachelor’s and a Master’s Degree in Public Management and several post-graduate diplomas in defence planning and various areas of management.

The opposition party says Mr Phillips is, therefore, “well qualified and equipped to partner with the PPP as its Prime Ministerial candidate” and that its party’s leadership and supporters expect the retired Brigadier “to serve all the people of Guyana in accordance with the high PPP tradition of discipline, dedication, loyalty and commitment, both in and out of Government.”

Mr Phillips was unanimously endorsed by the party’s central committee after the other contender, Bishop Juan Edghill, wrote the party withdrawing his nomination as a prime ministerial candidate for the Party, the PPPC said.

Previous: Juan Edghill drops out of PPPC prime ministerial race
Next: Podcast: Highlights of launch of A Partnership for National Unity+ Alliance For Change 2020 election campaign