PPP prime ministerial candidate may be selected by weekend 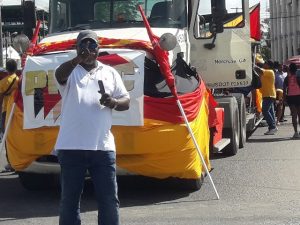 The opposition People’s Progressive Party (PPP) was Monday expected to begin high-level meetings to consider its pick from among at least three nominees for the post of prime ministerial candidate, the party’s General Secretary Bharrat Jagdeo said.

He told a news conference that if the PPP’s parliamentarians and Central Committee conclude their internal discussions by this weekend, Irfaan Ali’s running mate would “highly likely” be revealed at the launch of the party’s 2020 elections campaign on Sunday, January 5 in Kitty, Georgetown.

Jagdeo confirmed that there are three nominees. He did not name them but sources said they could include former Chief-of-Staff of the Guyana Defence Force, Retired Brigadier Mark Phillips; University of Guyana lecturer, Hugh Todd and former Junior Finance Minister Pastor Juan Edghill.

PPP presidential candidate, Ali declined to discuss the qualities he would like to see in his prime ministerial candidate, saying it would be “premature” to do so at this stage. “I would first have to have the decency of giving those nominees the respect of speaking about this issue through the procedure at those fora and what I can assure you, though, is that our prime ministerial candidate and all our nominees are people of high standing,” said Ali.

Meanwhile, Ali confirmed that he would like to see Jagdeo be a Vice President if their party wins the March, 2020 elections.

General and regional administrative council elections had been due the latest by August 2020, but the passage of the PPP-sponsored December, 2018 no-confidence motion and its ensuing legal wrangling and electoral preparations would see Guyanese voting in another two months in what is expected to be a fiercely contested poll.

Previous: Bandit pleads guilty to robbing Brazilian gold miner of raw gold, cash, other items
Next: Suspect in stabbing of Orthodox Jews in New York is of Guyanese parentage