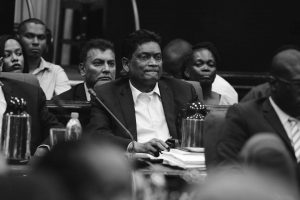 “I am telling you now that I will support Irfaan in his bid for President of the Republic of Guyana in this 2020 March 2nd general election and I know that I will make a valuable contribution to his team, to his party and to himself. I also know that Irfaan will do wonderful things for us as Guyanese,” said Persaud in a Facebook video. “Having had a year to sort things out, that from today, I am making a public declaration that I will support Irfaan Ali as presidential candidate of the People’s Progressive Party and I am looking forward to hearing him as the new president of Guyana,” he added.

Still rejecting claims that he had been paid a hefty amount of money to vote for the motion that had been tabled by Opposition Leader, Bharrat Jagdeo,  the former government backbencher for the first time supported Ali. “I honestly believe that he will do very well as President and today I’m saying this, I will support the PPP,” said Persaud who voted for the motion on December 21, 2018.

If the government and its allies had not challenged the motion in court, elections should have been held within three months of its passage by March 22, 2019. The Caribbean Court of Justice, Guyana’s highest court, later validated the motion in June, 2019 but the Granger-administration said it could not call elections unless the Guyana Elections Commission was ready to conduct the polls.

The government maintains that, despite the CCJ’s ruling, Persaud betrayed the Granger-led administration because he had been evidently and openly supporting the coalition in and out of the National Assembly.

Persaud barely referred concerns about the authenticity of at least one of the PPP presidential candidate’s qualifications but described Ali as a “young brilliant person” who had worked with the Finance Ministry, had been chairman of the parliamentary Public Accounts Committee and recently graduated with a Doctorate from the University of the West Indies (UWI). “Remember they questioned that boy, and I am saying boy; he is a young man. They questioned him about his qualifications. He walked up on stage in the presence of the entire Trinidad community and all the universities. The world was watching Irfaan Ali collect his PhD. He did not get an Honorary PhD. He worked to have a PhD and I knew he was doing that long before the no-confidence motion was tabled and before I voted long, long before that,” said Persaud.

Persaud said Ali is a “bright young man” who has “expressed remorse at some of the things” that had happened at the Ministry of Housing and Water and “during the years that the PPP spent in office.”

PPP General Secretary Jagdeo has already made it quite clear that Ali is his pick for the presidential candidacy because he is a hard worker.