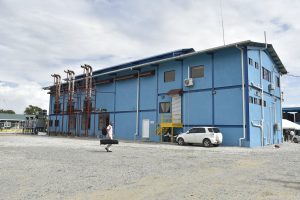 President David Granger Saturday morning commissioned a US$3.4 million power station at Dogg Point, Agatash in Bartica, Cuyuni-Mazaruni (Region 7), where he noted that it will bring unprecedented relief to residents who have experienced severe power outages over the years.

The President in his address at a simple ceremony, said it is inconceivable that Guyana can be on a path of development and ignore the evolution of its hinterland communities.

He noted that hinterland development must be accelerated to ensure greater equality and his government has started to reduce and remove hinterland underdevelopment. In this regard, he noted that investing in energy security is essential to hinterland development as an enlargement of the economy, expansion of employment opportunities and improvement in the quality of life, particularly in regions where investment and income levels are below the national average.

“Energy security for all is the ultimate objective of your Government’s energy policy. Energy security is vital to ensuring the good life for all. It is essential for human progress and well-being. The country is progressing towards the goal of energy security, even as its moves closer to greater renewable energy generation and use. Energy security is critical to Bartica’s role as the ignition of regional development. Bartica can fulfil these ambitions only if it is assured of adequate, reliable and stable energy to satisfy its present and future demands,” he was quoted as saying in a Ministry of the Presidency statement.

The Head of State noted that while the government is committed irrevocably, to moving closer to the goal of 100 per cent renewable energy use by 2030, it also recognizes the importance of ensuring adequate, accessible and affordable energy supplies during this period of transition.

In the interim, the President noted, the new power plant will greatly enhance operations and business in the town.

“The new 3.3 megawatt Power Generation Plant, which is being commissioned is of great importance at the municipal, regional and national levels. The new Bartica Power Plant replaces the old plant, which has inflicted intolerable electricity disruptions on the town. Those days are behind us. This plant will guarantee a stable and reliable supply of electricity. The Plant’s generating capacity will exceed the town’s peak demand, with sufficient spare capacity to cater for the town’s short to medium-term power needs. The Plant will not displace the renewable energy sources which will one day power, entirely, Bartica,” he said.

The President added that the plant, at the municipal level, will assure the town’s households, businesses and government agencies an adequate, stable and reliable source of electricity, will eliminate the frequent power outages and will encourage business expansion, since its total generating capacity exceeds the existing peak demand for power.

“The Plant, at the national level, is part of government’s efforts to ensure energy security during the critical transition phase to full renewable energy use. The Plant will strengthen Bartica’s role as the ignition of development in the Cuyuni-Mazaruni Region. The entire Region will benefit, indirectly, from your government’s investment. The Plant demonstrates your government’s commitment to Bartica and to the Cuyuni-Mazaruni Region. It signals the continued success of your government’s efforts to improve the quality of life of citizens and to create an enabling environment for business development. Bartica is being strengthened to lead,” he said.

The Head of State noted that the transition to renewable energy coincides with the 2020-2029 Decade of Development, which is a ten-year plan that will see accelerated development in all sectors, including the energy sector.

The 2020-2029 decade, he noted, will encompass the promotion of greater energy efficiency, including the upgrading of the existing electricity network and mandating of energy-efficient technologies for new buildings by 2030; the provision of incentives for private energy producers to supply power to the national grid and to off-grid communities and harmonization and enabling modern legislation to govern the electricity sector; and the expansion of hinterland and rural electricity distribution, especially to unserved and underserved communities and guaranteeing affordable, reliable and stable electricity for households and businesses.

Meanwhile, Minister of Public Infrastructure, David Patterson in his remarks, said that electricity generation is a critical component of the infrastructure of a country and Guyana is no exception.

He noted that the importance of Bartica as a town is the strategic role that it plays as a major conduit to mineral-rich parts of the country and the support that it gives to the gold and diamond industry.

Minister Patterson said that in keeping with its administrative status and economic importance, Bartica must therefore be endowed with the infrastructure to continue playing its pivotal role in the transformation of Guyana. He said the people of Bartica must be able to enjoy stable and reliable electricity supply, which is intended to further develop the town and the region as a whole.

He noted that the old power plant, which was installed around the year 2000 with a 4 MW power capacity, lost its efficacy over time and became increasingly unreliable. It could no longer do the job after 18 years, Minister Patterson emphasized.

“Complaints of blackouts were frequent. Frustration was mounting among residents, night-time studies were difficult for schoolchildren, commerce and industry could not get the support they deserved and the old plant had become an environmental hazard. No serious institution or government would allow that to continue. So, with the blessings of this administration, GPL was allowed to go ahead and make the investment necessary to provide Bartica with stable and reliable electricity,” he said.

The Minister of Public Infrastructure stated that while the new Bartica power plant is small, it is an important part of the national infrastructure, which is being built across Guyana to help improve the lives of citizens.

“The installation of this combined system of stationary diesel-powered and mobile generating units gives Bartica approximately 6 MW (3.3 commissioned and 2.2 reserved) of installed capacity to provide light to the community and assurance to households and industry that their government remains committed to the future growth and development of this Region. We do not intend to stop here,” Minister Patterson said.

Noting that Bartica must lead the way towards the creation of “green towns” and cities all over Guyana, he informed that plans are afoot to install a 1.5 MW solar photovoltaic (PV) farm with storage in Bartica. He said that this project is currently in the procurement stage with international bids opening on January 7, 2020.

Minister Patterson added that the supply of electricity from renewable sources will be further increased by connecting the power supply in Bartica with the planned 1 MW hydropower plant to be built by the Guyana Energy Agency (GEA) at Ikurubisi.

Regional Chairman, Gordon Bradford, in brief remarks, said that the regional administration as well as every Bartician can now breathe a sigh of relief since their power woes will now come to an end after many years of waiting.

“This occasion holds a special place in my heart. We would have been working on this year after year. We have had several visits from previous Ministers but sometimes it was so frustrating and we thought it would not become a reality until this government. I remember Minister Patterson telling me not to worry and that it will be fixed. So today, we want to thank the government of Guyana and President Granger,” he said.

Also in attendance at the event were Minister of Social Cohesion with responsibility for Culture, Youth and Sport, Dr. George Norton, Chief Executive Officer of the Guyana Power and Light Incorporated, Albert Gordon and Directors of the Board of GPL.