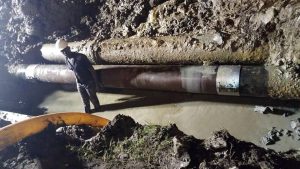 The repaired pipe under Church Street, Queenstown, opposite the Indian High Commission.

“Following nonstop works since earlier today  (Saturday), the broken 16-inch transmission main at Church Street has been repaired as seen in the photos below,” the company said.

GWI said it was expected to take approximately 30 minutes to one hour for the lines to be pressurized and fill up before it can reach customers’ taps.

GWI thanked customers for their patience.