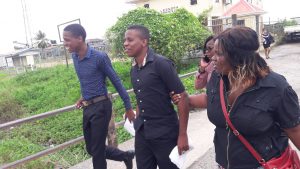 Police constables Daniel Bernard and Isaiah Bernard as they left the Leonora Magistrates’ Court in the company of a family member.

The two policemen, who beat and burned a teenager who allegedly burgled their home, were Friday released on a total of GYD$800,000 bail.

The police prosecutor, Inspector Matthew did not object to bail.

They were required to surrender their passports and report to the Wales Police Station every Friday. The case comes up at the Wales Magistrates’ Court on January 30, 2020.

They were jointly charged with abducting 17-year old Ashkay “Gauge” Budhiram of Westminster, West Bank Demerara with intent to wrongfully confine him. The Bernard brothers were also charged with unlawfully and maliciously wounding Budhiram with intent to maim, disfigure and cause him grievous bodily harm.

The prosecution alleges that on December 16 at about 11:30 am the policemen and six others went to a betting shop at Schoonard, West Bank Demerara, held Budhiram and beat him with a baseball bat, steel bar and crowbar even as they accused him of breaking into their home.

Budhiram also told investigators that the policemen handcuffed and placed him in a car trunk and sped off.

The Bernard brothers, according to the prosecution, took Budhiram to an unknown location where they threw hot liquid, more than likely water, from a kettle on him.

Budhiram told police that he escaped by swimming across a trench and reported the incident to police.