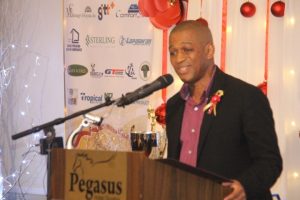 Head of the Ministry of the Presidency’s Department of Energy, Dr. Mark Bynoe addressing the 2019 Awards and Dinner of the Guyana Manufacturers and Services Association on December 18, 2019.

Head of the Ministry of the Presidency’s Department of Energy, Dr. Mark Bynoe Wednesday night said the architects of Guyana’s local content policy would not be swayed by politicians who seek to galvanise support from among ordinary people at election time.

Bynoe indicated that local content policymakers were under constant political pressure to generate jobs and other opportunities in a short space of time to help improve the livelihoods of people. “This task is made especially difficult because industrial capacity is unusually low and the socio-economic expectation and often resulting political pressure that demand quick success stories from local content measures.,” he told the 2019 Awards and Dinner of the Guyana Manufacturers and Services Association (GMSA).

A natural resources economist by profession, who has had no political experience, Bynoe suggested that creating a local content policy was even more challenging in the lead up to Guyana’s next general elections scheduled for March 2, 2020.

“The decision of whether to give in to such expectations and pressures is particularly relevant ahead of our national elections when populist promises tend to overrule realistic outcomes. Instead of blindly going down the populist route, the Department of Energy has taken a considered, if non-popular, approach to properly assess the relevant barriers to local development in Guyana and has, therefore, sought to design a fit-for-purpose local content policy with requisite applicable measures, realistic policy targets and the metrics to monitor the effects of such policy implementation,” he said.

While government had to decide on whether there should be a national local content policy or one that focusses on specific sectors, he said ultimately the process must involve the key ministries whose sectors are set to benefit from the local content goals, as well as foreign investors that will have to evaluate what is possible.

Against the background of repeated concerns by sections of the private sector that foreigners, particularly Trinidad and Tobago businesses, were coming to take over Guyana’s emerging oil and gas sector, Dr. Bynoe cautioned against limiting local content to only cash. “Local content is not just about monies coming in. It’s also about standards that are being raised. It’s about training that will ultimately ensue; it’s about knowledge transfer and technology enhancement,” he said.

Bynoe noted, like Ghana, Angola and Equatorial Guinea, Guyana lacked some or all of the required local expertise and locally-produced goods to undertake deepwater exploration and production, “forcing it to rely on outside support from foreign companies for these”. He noted that the debate about local content has been centred around concerns that some of the wealth is being reexported rather than being retained in Guyana.

Guyana’s “fit-for-purpose” local content policy, he said, was being designed largely for the manufacturing and services sector.

In the area of training and education, Bynoe said ExxonMobil majority-owned Esso Exploration and Production (Guyana) Limited (EEPGL) was working with the Council for Technical Vocational Training and the Board of Industrial Training to conduct third-party assessments of some of its laboratories at various educational institutions, rehabilitating at least two labs and assisting with the revision of the curriculum to ensure they are more “industry-ready”.

He also disclosed that the EEPGL and the Guyana government were discussing the establishment of a small and micro-financing facility to assist small indigenous businesses to build their capacity to access more of the local content being generated in Guyana.

Over 1,700 Guyanese are employed in the oil and gas industry and more than 70 joint ventures have been established since the formation of the Centre for Local Business Development, but the Head of the Department of Energy acknowledged that “more remains to be done.” He said Guyana’s local content thrust would see more job opportunities in the petroleum sector and spin-offs in banking, power generation, manufacturing, construction or telecommunications.

“The draft local content policy seeks to ensure the highest possible rate of domestic employment, strengthen the local economy and help the Guyanese economy to become less reliant on foreign capital and expertise,” he said.