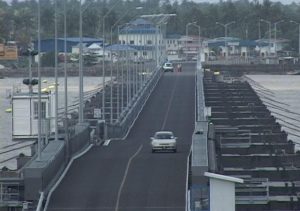 Government has been given the green light to continue managing the Berbice Bridge Company Incorporated (BBCI), government’s Department of Public Information reported.

This comes as Chief Justice Roxanne George issued a ruling on Wednesday that deemed the administration’s supervision of the bridge as lawful.

BBCI had moved to the courts to overturn the Government’s decision but this was stopped as the High Court maintained the Government to be in full compliance with the Berbice River Bridge Act.

In November 2018, Government assumed control of BBCI as a matter of public safety after the transport company passed a unilateral decision to institute a 360 percent increase in toll. It is alleged the astronomical toll increase was to offset a $6 billion debt.

The Chief Justice contended the decision by the Board of Directors could not have been lawfully made without consultations with the Minister of Public Infrastructure, as is required by the Berbice River Bridge Act.

The Coalition Government continues to maintain that the increases the BBCI sought to impose were a direct hindrance to the freedom of movement and trade among citizens in the Berbice county.