The bus that collided with the lorry at Fairfield, Mahaicony Public Road.

Four people, including a pregnant woman, were killed Wednesday in a collision between a minibus and a lorry that transports bottled beverages, Region 5 Divisional Police Commander, Superintendent Yonette Stephens said. 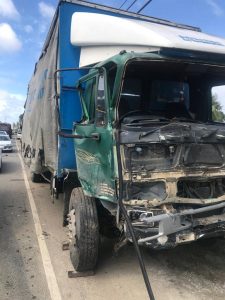 The lorry driver and the other passengers in the minibus were taken to Mahaicony Cottage Hospital where they were treated and later tranferred to the Georgetown Public Hospital and all admitted. The other two passengers are:

“Their conditions are regarded as serious,” police said.

Superintendent Stephens told News-Talk Radio Guyana 103.1 FM/Demerara Waves Online News that preliminary investigations reveal that the western-bound minibus was speeding when one of its tires punctured and the vehicle ended up in the path of the oncoming lorry that was heading in the western direction.

Broken bottles and the bodies of dead and injured were strewn across the accident scene on the Mahaicony Public Road.

Meanwhile, Police Commissioner Leslie James remarked at an annual officers’ lunch with President David Granger that, “we have seen an increase in road carnage and this has resulted in the operationalisation of ‘Safe Roads’. That operation is expected to last for as long as we think we have seen a change in the attitude of motorists.”

Previous: “I ruled in the interest of transparency” for field verification of registrants – GECOM Chairman
Next: Gov’t management of Berbice Bridge upheld by Chief Justice