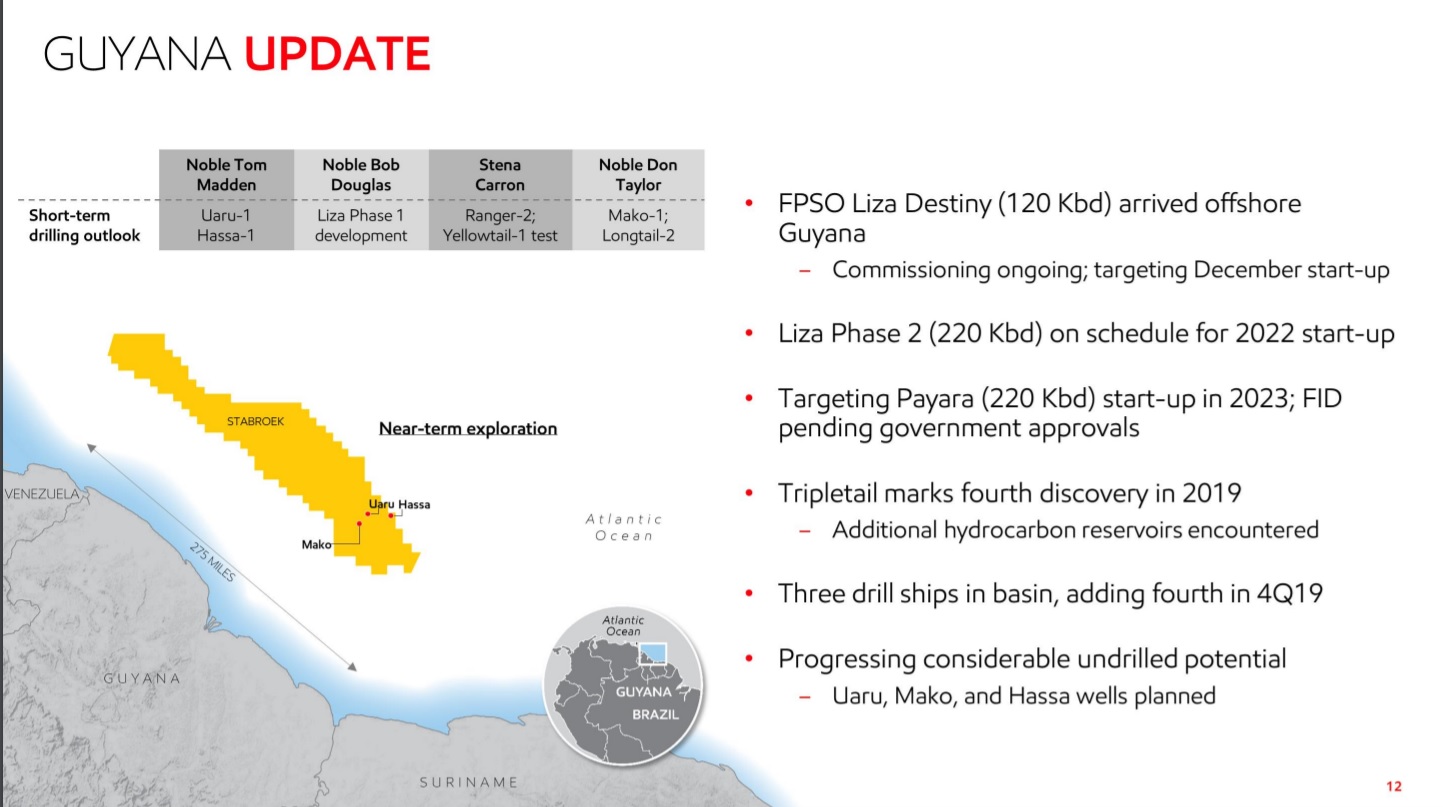 An ExxonMobil map showing the three exploration wells – Uaru, Mako and Hassa – that the company plans to commence drilling during the last quarter of 2019.

“The target for achieving first oil is December, dependent on favourable weather conditions,” he told a webcast on ExxonMobil’s third-quarter 2019 financial and operating results. “This will place start-up within five years of initial discovery, well ahead of the typical pace for the industry of closer to nine years,” he added.

ExxonMobil had originally projected first oil from Liza Phase 1 during the first quarter of next year.

When Hess Corporation’s Chief Executive Officer, John Hess announced that first oil from the Liza Phase One would be in another two months, he did not state that it was conditional on weather or any other factors. ExxonMobil officials explain that sea turbulence will affect the pulling up risers from the wells to the Liza Destiny, a floating, production, storage and offloading (FPSO) vessel.

“If the weather conditions remain stable offshore and don’t interfere with ongoing work, the schedule would indicate mid-December. Weather is out of our control. If bad weather makes working conditions unsafe, could cause delays,” an oil industry official told News-Talk Radio Guyana 103.1 FM/Demerara Waves Online News.

Hansen also announced on Friday that a fourth ship would start drilling activity at three wells- Uaru, Mako and Hassa – during the last quarter of 2019.

Engineering  and construction for Liza Phase 2, he said, was progressing well following a Final Investment Decision earlier this year, in addition to expected government approvals for Payara’s planned start-up in 2023.

ExxonMobil expects that Guyana will produce 750,000 barrels per day from several wells by 2025.

Appraisals of the Ranger, Yellow-Tail and other wells are being conducted before ExxonMobil advances its work programmes for possible production. “One of the challenges that we have given all of the significant exploration success that we have had is making sure that we take the time to optimise the development. We don’t want to rush in a way where we do something that we might regret down in the future and so as we have all these new discoveries, we want to make sure that we are optimising the value not only for us but for all the stakeholders involved,” Hansen said.