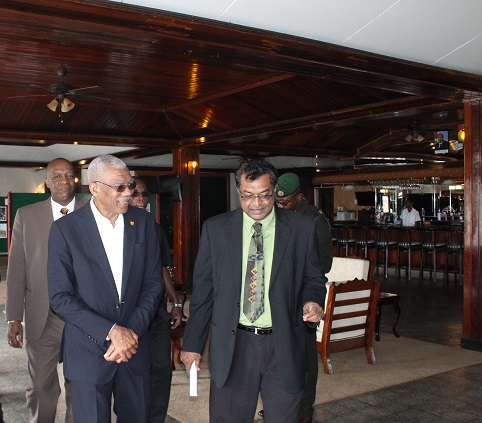 Alliance For Change (AFC) Leader, Khemraj Ramjattan on Thursday looked set to be accepted by President David Granger as his running mate for the March 2020 general elections, high-level sources said.

The sources indicated that the AFC was unlikely to give up any seats in the 65-seat National Assembly in exchange for Ramjattan being accepted as the prime ministerial candidate.

Mr. Ramjattan and Mr. Granger met, along with Chief Negotiator for the People’s National Congress Reform-controlled A Partnership for National Unity, Volda Lawrence and her AFC counterpart, David Patterson.

Ms. Lawrence and Mr. Patterson emerged from the meeting with an air of optimism that their differences would be settled. Patterson was not prepared to say more than “progress” was made in the talks, while Lawrence said APNU and AFC were virtually inseparable despite a number of “bumps in the road”.

“Both sides have some work to do and we have agreed that we will do the work as soon as possible so we have given ourselves some timeframes and we are both committed to work to those timeframes so the outtake of the meeting is progress,” Mr. Patterson said. “We have always been one, we never severed, the Siamese twins remain,” he added.

The APNU and AFC negotiators are expected to meet as early as Friday.

AFC negotiator, Dominic Gaskin is on record as saying that his party was insisting on Mr. Ramjattan being accepted as Granger’s prime ministerial running mate and that his party would not relinquish parliamentary seats. Mr. Gaskin has also said that AFC has also told APNU that it was willing to give a written assurance that it is not interested in the presidency if Mr. Granger is no longer able to continue in office.

Ramjattan, who is Minister of Public Security, is currently acting Prime Minister in the absence of Moses Nagamootoo. There has been some resistance to Ramjattan in the PNCR camp.

It is unclear what will be Ramjattan’s portfolio of responsibilities if he is sworn in as Prime Minister should the APNU+AFC coalition win the March 2020 elections.

Nagamootoo is currently responsible for governance, parliamentary affairs, the state media and broadcasting except for spectrum management.