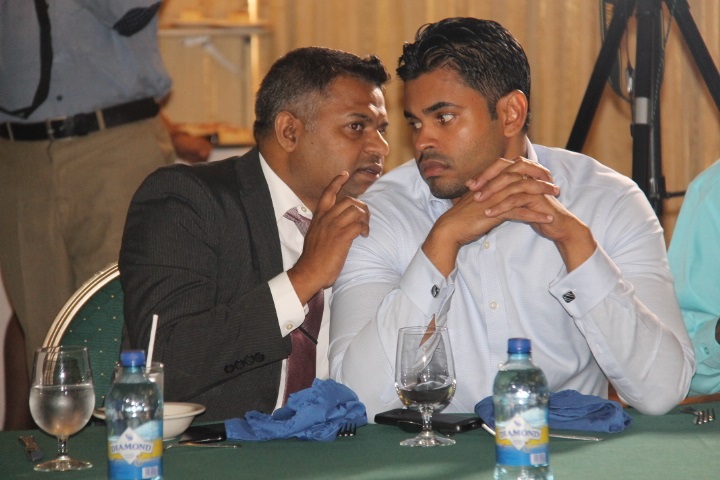 Head of Petroleum at the Georgetown Chamber of Commerce Charles Ramson (right) and President of the Chamber, Deodat Indar.

Head of Petroleum at the Georgetown Chamber of Commerce and Industry, Attorney-at-Law Charles Ramson is flaying President David Granger for being virtually silent on key issues in the oil and gas sector.

Mr Ramson, who holds a master of science in Oil and Gas Enterprise Management from the United Kingdom’s University of Abeerdeen, describes the establishment of the Department of Energy and appointment of Dr. Mark Bynoe as head as a very “unusual type of arrangement”.

While the President is the Minister of Petroleum, Mr Ramson criticized the President for speaking very loosely on oil and gas sector instead of dealing with major policies, and legal and regulatory issues. “He has got to be able to explain our strategy in terms of our governance framework,” he said speaking with British journalist, John Mair during a series of one-on-one interviews at the Georgetown Club.

Mr Ramson, a former parliamentarian for the opposition People’s Progressive Party (PPP), wants the President to say why there is no petroleum commission, why was the sovereign wealth fund was established belatedly, what was its design and why the opposition was not involved, and why the local content legislation and policy were not passed.

“Those things are important because when you miss important governance frameworks, you’re really missing wealth creating opportunities and the improvement of people’s lives,” Mr Ramson added.

Mr Ramson said the Guyana government needs to focus on governance issues. The Commonwealth and the World Bank have been assisting Guyana in improving its governance, environmental, taxation and other systems ahead of the commencement of oil production during the first quarter of next year. He said the PPP, for which he would be a candidate at the next general elections, would put in place very strong governance systems and keep the nation informed about the oil and gas sector.

Touching on the area of oil-related corruption, he said Guyana needs a strong Integrity Commission. “There is always going to be some degree of corruption regardless of where you are and, just like anything else, you have to establish various systems. Your Integrity Commission has to be strong, you have got to have full disclosure for public officials,” he said.