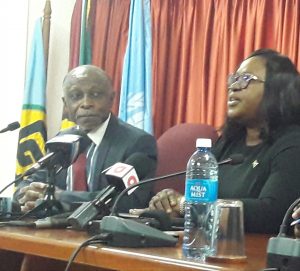 Foreign Affairs Minister, Dr. Karen Cummings on Wednesday rubbished calls by intergovernmental organisations – the Commonwealth of Nations, the Organisation of American States (OAS) and the European Union – as well as the United States and United Kingdom for President David Granger to abide by Guyana’s constitution.

“All this agitation, I think is uncalled for but we are a government; we remain in power until another President is sworn in and come March 2, wherever the chip falls, we’ll respect the rule of law but until such time, we’ll continue with our transformative changes and development of the country,” she said when asked to respond to suggestions by the US, UK and EU that assistance could be adversely affected by the political situation here.

The Foreign Minister said she told United Nations Secretary General, António Guterres that there was no war or loss of lives in Guyana. “I don’t think we need sanctions at this time because we are very peaceful citizens. We are going along our peaceful way; who is going to market or going to work. Thank God, we have maintained the peace,” she added.

The Foreign Minister said “everybody is free…that is their rights I guess. But you know we strive to ensure that we don’t interfere in other person’s territory. We maintain our territorial integrity and our sovereignty and even the CARICOM’s (Caribbean Community) position is non-interference, non-intervention.”

Guyana has signed on to the democratic principles of the Commonwealth and the OAS which have on occasions suspended membership for major violations. Fiji, Nigeria, Pakistan, and Zimbabwe were suspended from the Commonwealth, a 53-nation organisation of Britain and her former colonies. Cuba and Honduras have been suspended from the OAS, while the US had failed to convince other member states to suspend Venezuela from that hemispheric body.

The Commonwealth Secretary-General, Baroness Patricia Scotland had on September 23 called on Granger to restore constitutional rule by setting an early elections date in keeping with Guyana’s constitution.

“I do agree that there was a misunderstanding and we were able to clear up some of this with the Commonwealth Secretary-General Baroness Scotland because what happens you know, people like to take first jump. Our Opposition Leader would have been sending out signals, proffering different statements and so on.

So what you have heard of first you may want to react to. But when you at look Guyana, we are going ahead with our business agenda, it is business as usual, so to speak. We know a date has been fixed, we know elections are due; is a part of our constitution. We will abide by that. The President has said that several times and that is what we are doing,” Cummings said at her first news conference since her appointment earlier this year.

It was only two days after the OAS had publicly called on Granger to end political uncertainty that on September 30 he constitutionally proclaimed elections date as March 2, 2020. Regardless of whether the opposition People’s Progressive Party (PPP) returns to the 65-seat National Assembly to allow for a two-thirds parliamentary majority for the extension of the life of the government.

The Foreign Minister stressed that President Granger had accepted his interim status and would remain in office until elections are held contingent on GECOM’s readiness, having exploited the options in the High Court, Guyana Court of Appeal and the Caribbean Court of Justice. “We don’t want to be like a headless chicken, everybody comes out; public servants need to be paid and so on. We have been reiterating that we are aware of the situation, we don’t want to aggravate the situation,” the Foreign Minister said.

Asked whether government believed that the proclamations for general and regional elections to be held on March 2, 2020 have effectively prevented the imposition of sanctions by the Commonwealth, OAS and others, Greenidge responded that “You are looking to have us make interpretations that are hazardous. In other words, I don’t know what these agencies were going to do, but the President has named a date and you would see that in all cases where there had been pronouncements, they have said they are happy to see that a date has been named.”

Meanwhile, US Congressman Gregory W. Meeks, a senior member on the House Foreign Affairs Committee, on Wednesday welcomed President Granger’s proclamation of an election date in accordance with Guyana’s constitution. “A steadfast commitment to the constitution and the rule of law remains in the best interest of all Guyanese people. Democratic norms must always be respected, and I urge all parties to move expeditiously toward elections in adherence to the time-frames established by the Guyana Elections Commission (GECOM),” he said.