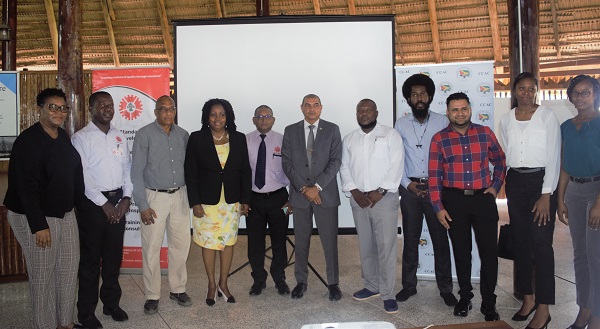 The Guyana government on Wednesday unveiled 31 new standards to regulate the importation and sale of electrical installation items and equipment.

During the launch hosted at the Umana Yana in Kingston, Georgetown the participants were told that the new standards will be used as a threshold to commence monitoring of the importation of electrical equipment. The equipment which will now be monitored by the Guyana National Bureau of Standards (GNBS), in addition to 15 other types of products currently being monitored, will include seasonal and holiday decorative products, lamp holders, armoured cables, panel boards, surge protective devices, cord sets and power-supply cords and thermoplastic-insulated wires and cables.

The Government Electrical Inspectorate arm of the Ministry of Public Infrastructure on Wednesday launched an awareness campaign, with electricians and importers of electrical products, in collaboration with the GNBS and the Guyana Competition and Consumer Affairs Commission (CCAC) and other key stakeholders.

“Importers of the products listed above must register with the Bureau of Standards. Furthermore, these items will be flagged at importers’ bonds and even sale outlets for inspection,” the ministry said in a statement.

Head of the Product Compliance Department at GNBS, Shailendra Rai pointed out during his presentation that sub-standard electrical products, after February 2020, will not be allowed to enter the jurisdiction. However, it was noted, that inspections will be conducted at electrical stores before and after the implementation of the standards to ensure compliance. Sub-standard products will not be seized after the timeline would have elapsed if inspectors observe that stocks were reduced and not replenished.

Minister of Business, Hemraj Rajkumar said, “I really believe that the Guyanese public, the Guyanese consumers must be given an opportunity to access products of the highest quality and hence, the urgency of me having these standards passing through cabinet and being approved.”

He said, “he has taken note of the several fires in Guyana which were caused by faulty electrical appliances and products, which will now hopefully be reduced with the implementation of the new standards.”

Executive Director at CCAC, Dawn Cush during her brief remarks assured the stakeholders that “We work along with the other agencies to ensure we lend them the knowledge of the legislation to ensure that the development of these standards are in compliance with the law.”

She added that the Commission is presently not in receipt of “an alarming number of complaints” as compared with the other agencies, as she noted that that body believes in taking a proactive approach rather than a reactive one.

Meanwhile, Councilor at the Georgetown Chamber of Commerce and Industry, Keon Howard pointed out the importance of having electrical standards. According to him, “When buying materials, you need to be careful…When you are buying electrical devices it’s important to be aware of the overall voltage rating of equipment as well as the power source you are using.”

The new standards will seek to improve the products being sold to customers which were developed in just over a year by Chairperson of the National Electro Technical Committee at GNBS, Rowen Willabus. He foresees the standards to be “very beneficial.”

Previous: GTT rolls out 4G LTE in selected areas, calls for more spectrum to expand mobile services
Next: Foreign Minister rails against international calls for Guyana to abide by constitution