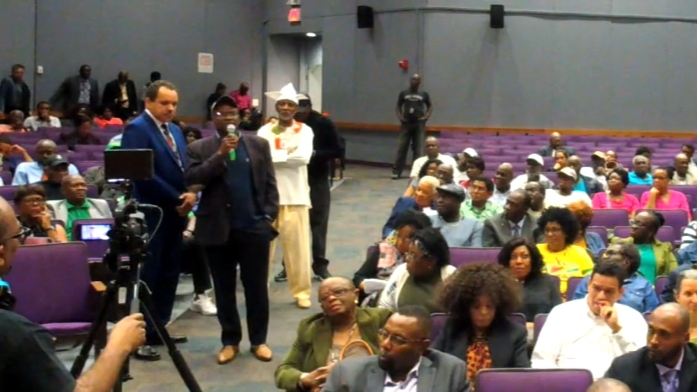 A section of the attendees at a Town Hall meeting with Foreign Affairs Minister Dr. Karen Cummings.

“I would say it’s in progress. We are still continuing how we are going to actually do this cash transfer so I don’t want to give myself liberty right now to say that we are going to do A or B but I know it’s under active consideration and some of the players, the economists, are deciding how best it will filter down to the ordinary man,” she told a recent town hall with Guyanese in New York on September 26.

The WPA wants the direct disbursements of cash to be among the APNU+AFC promises for the 2020 general elections.

Dr. Cummings acknowledged Distinguished Economics Professor, Clive Thomas; colleague WPA executive member, Professor David Hinds and other persons who have talked about direct cash transfers. Thomas first floated the idea one year ago and has since calculated that at US$70 per barrel, at least US$1 billion dollars would be available to transfer at least US$5,000 annually to the more than 200,000 households across Guyana. According to Thomas, the transfer scheme should begin in 2025 when oil production reaches 1 million to 2.5 million barrels per day.

The Foreign Affairs Minister had remarked that the Granger administration preferred to teach people to earn instead of giving them handouts. “We, of course, rather than giving a man a fish, teach him to fish,” she said.

This is the first time that a Guyana government official has gone this far to say that the WPA’s cash-transfer proposal was being considered. Former Foreign Minister, Carl Greenidge, Finance Minister Winston Jordan, Guyana’s High Commissioner to India, David Pollard, Former US Ambassador to Guyana Perry Holloway and others have poured cold water on the idea of direct cash transfers.

Cummings conceded that the amount of oil that has been discovered by the United States-headquartered ExxonMobil and the United Kingdom-based Tullow Oil was a lot for Guyana’s small population of about 750,000 persons. “It’s not only lil bit oil. It’s a lot of oil and we don’t have the population to spend that money. Of course, we have the Sovereign Wealth Fund which we have already set aside. Some of the money will be going there so your children will have, time to come, enjoy part of the sweet,” the Foreign Minister said.

Professor Thomas has stated that his proposed cash transfer scheme would help fight income poverty, would not be permanent and would take account of fluctuating oil prices.