Release from the Civil Defence Commission: 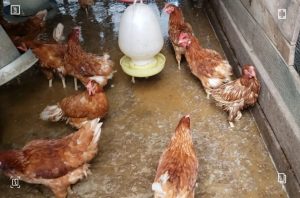 The Civil Defence Commission (CDC) received reports of flooding in the Mahaica-West Berbice Region (Region 5). The floods are as a result of above-normal high tides predicted at approximately 3.31 meters. The effects of the tides have been exacerbated by a breach in the Danzic sea defence dam.

Over 200 meters of the structure have been compromised. On Saturday a five-person team was deployed to the communities of Danzic, Columbia, Glazier’s Lust, Fair Field, High Dam and Prospect.

The team, in collaboration with the Regional Democratic Council of Region 5, conducted a rapid assessment across the communities and found that seven families experienced flood waters in their homes. It was noted that several small-scale subsistence farms and livestock were severely affected.

More than 10 rice-cultivated plots were inundated with salt water on the northern side of the villages while a further five on the southern side have been affected.

The CDC provided the seven families with cleaning hampers to help them return their homes to normalcy after the high tides. To further prepare for the two remaining days of above-normal high tides, residents have been provided with sand to create sand bag barriers.

The Ministry of Public Infrastructure and the National Drainage and Irrigation Authority (NDIA) have provided excavators to widen channels to alleviate some of the flood waters. Members of the Guyana Livestock Development Authority (GLDA) and the Mahaica-Mahaicony-Abary (MMA) authority also conducted their own assessments.

Residents of the affected areas are advised that the above-normal high tide warning remains in effect until Wednesday and are urged to take precautions.