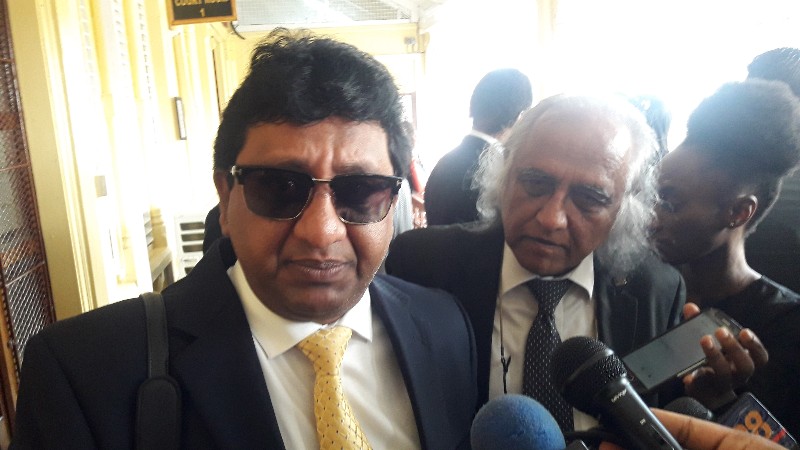 Attorney-at-Law, Anil Nandlall on Thursday backed down from his plan to appeal Chief Justice Roxane George-Wiltshire’s decision that house-to-house registration is not unconstitutional, saying that the case achieved the major objective of preventing the removal of thousands of persons from the National Register of Registrants.

“In the circumstances, after a more mature consideration of the Chief Justice’s decision and after conferring with my client and other counsel involved, including Senior Counsel, it is our considered opinion not to appeal the decision of the learned Chief Justice. Needless to say, we may reconsider our position, should appeals be filed by the other parties in the proceedings,” Nandlall said in a statement.

Referring to the Chief Justice’s ruling in which she stated that house-to-house registration or any other method agreed to by the commission to verify the list of registrants, Nandlall said George-Wiltshire “repeatedly emphasized that the current Official List of Electors (OLE) can be refreshed with a suitable Claims and Objections period and lawfully used for the next elections, but that it is for the Guyana Elections Commission (GECOM) to ultimately make that decision.”

The former Attorney General said Ram, a political commentator, felt vindicated that the Chief Justice’s decision blocked a plan to remove thousands of Guyanese from the National Register of Registrants from which the voters’ list is extracted. “By these pronouncements alone, the legal proceedings filed by Christopher Ram, achieved its principal objective, that is, to thwart the Government’s grand plan of using the House to House Registration process, as a vehicle to de-register tens of thousands of qualified electors for the next elections, thereby depriving them of their constitutional right to vote,” Nandlall said in his statement.

The Chief Justice also said overseas-based Guyanese could not be removed from the National Register of Registrants unless it is by death, insanity and loss of citizenship “and that the scrapping of the existing database of registrants will be illegal.”

Jagdeo and Nandlall also claimed legal victory in the Chief Justice’s interpretation of the Caribbean Court of Justice’s (CCJ) consequential orders that last December’s no-confidence motion was validly passed. For them, he said the actual date by which elections ought to have been held was March 21 instead of September 18, three months after the regional court validated the motion.

“Therefore, the three-month period for the holding of General and Regional Elections as mandated by the said constitutional provision, immediately begun to run and expired on March 21, 2019, as there was no extension of this time by the National Assembly. The natural corollary therefrom, is that the Government became illegal and unconstitutional on March 22, 2019. From this perspective, we were quite benevolent to the Government by our submissions that the life of the Government will expire on September 18, 2019, unless elections are held on or before that date,” Nandlall said.

Previous: Jagdeo, GECOM lawyer, AG Williams bicker over High Court’s decision that registered persons can’t be removed from list
Next: WPA calls on PPP to extend life of government ahead of poll preparations