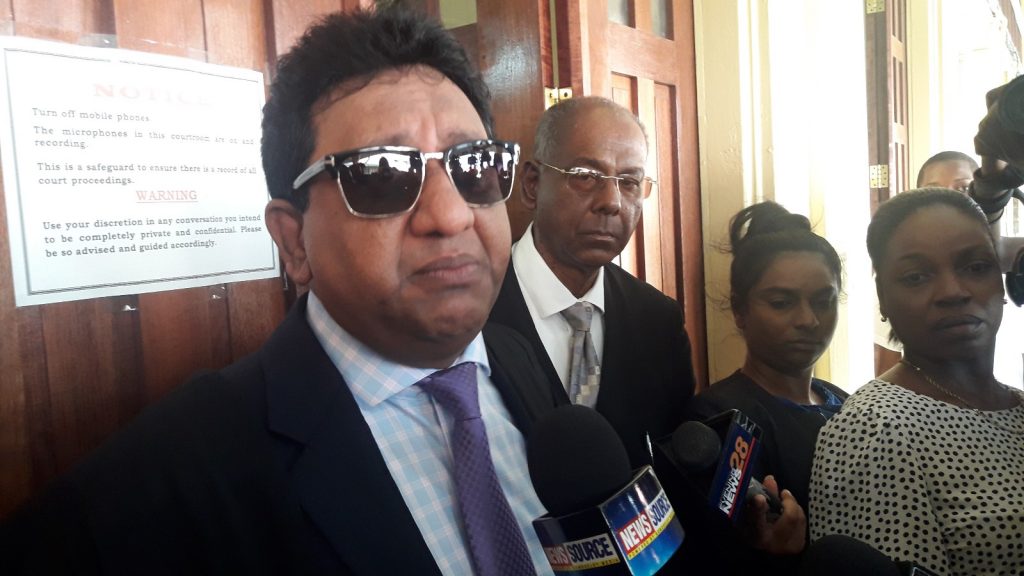 Lawyers for Christopher Ram and the Guyana Elections Commission on Wednesday said they were prepared to appeal a High Court decision for different reasons, even as Opposition Leader Bharrat Jagdeo claimed a legal victory that Guyanese cannot be removed from the National Register of Registrants and must be allowed to vote.

Ram’s lawyers, Anil Nandlall and Senior Counsel Ralph Ramkarran were taken aback by Chief Justice Roxane George-Wiltshire’s ruling that the court could not set a timeframe within which general elections must be held. Ram had wanted the Court to order the quashing of the house-to-house registration process on the ground that it would collide with September 18 by which he said elections ought to be held after the Caribbean Court of Justice validated last December’s parliamentary approval of the no-confidence motion.

Nandlall said he would be challenging the Chief Justice’s decision in the Guyana Court of Appeal. “Obviously, we will appeal because we do not agree that no timeframe has been fixed….It cannot be open-ended. The CCJ judgement could not have meant that elections would never be held unless Parliament agrees. Suppose Parliament does not agree. There is always a timeframe implied. The constitution must be obeyed at its earliest convenience and in relation to that, respectfully I am not impressed with that aspect of the ruling and that certainly will excite the review of an appellate tribunal,” said Nandlall, a former Attorney General. On whether an appeal could result in a further delay in the holding of elections, he said right now the there was no timeframe.

In that regard, Jagdeo said it was now clear that elections ought to be held three months after the passage of the no-confidence motion. Jagdeo said there was no need to re-litigate that point and said his People’s Progressive Party (PPP) had at first been generous in giving the David Granger-led administration up to September 18 to hold elections. “We were generous in our calculation of the three months starting from the date of the CCJ ruling, then it has to be March 21st because there has been no extension of the life of the government from March 21st when elections ought to be held because the no-confidence motion was validly passed in December so from this ruling, for me now, the government is a usurper; we have had unconstitutional rule since March,” he said.

The Opposition Leader said since Parliament did not extend the life of the government, the Granger administration has a longer period of decision-making for which to account.

Jagdeo downplayed the fact that the High Court did not grant Ram’s requested orders that the CCJ fix a date by which general elections must be held, the house-to-house registration exercise that began on July 20 was illegal and unconstitutional because it would collide with the elections timeframe, and for persons to be removed from the database of registrants as a result of fresh house-to-house registration.

The Opposition Leader said the Chief Justice’s reasoning that residency was not a criterion for removing the names of persons, a process that could be done only if they are deceased or no longer a Guyanese citizen meant that the current house-to-house registration process “has been a complete waste of time and money”. “They cannot remove people from the NRR (National Register of Registrants) who are already registered,” he said. “This is key for us. That is what we were fighting for all along because we felt that they were going to de-register thousands of people,” he added.

“That means that the NRR that we have used to extract the OLE (Official List of Electors) for all elections before remains intact and when the enumerators come around now, whether you are home or not, whether you register or not, once your name is on the NRR and you voted in the last elections, then they cannot remove your name. Your name will be on the updated NRR and the Official List of Electors so we are vindicated in telling people not to register,” he said in a reaction to the media without taking questions.

On that point, Attorney General Basil Williams said Ram did not ask the High Court for an application or declaration. He said lawyers would have to study the Chief Justice’s ruling especially since overseas voting was abolished and residency was introduced in the Representation of the People Act. “Residency is a very important aspect because that is the only way you could locate someone for voting; otherwise it would mean you are on the list (but) where do you vote? You have nowhere to vote,” he said. The Chief Justice said unless registrants change their address during house-to-house verification or office registration at one of GECOM’s district offices, they would have to vote in the district where they were last registered.

GECOM’s Attorney-at-Law, Roysdale Forde said he was inclined to file an appeal but preferred to await his client’s advice. “Subject to further instructions, of my own opinion at this present time, I believe that there is a serious ground, a serious flaw in the decision to that extent and I would advise my client to appeal. The issue was never raised as part of the pleadings in the document. You heard that the court dismissed every application filed,” he said.

Ramkarran hailed the Chief Justice’s decision that names could not be taken off the register and residency was not a requirement. “To that extent, the house-to-exercise that is going on is deeply flawed,” he said.

Jagdeo welcomed the Chief Justice’s position that house-to-house registration was not illegal or unconstitutional in itself but the Guyana Elections Commission (GECOM) could not operate as if it was a normal elections cycle. The Judge urged the elections management authority to consider not only house-to-house registration to verify the national register of registrants, but also any other form of verification. In that regard, Jagdeo said he expected GECOM to swiftly shift to a claims and objections period to update the list and move to elections.

The seven-member GECOM is Thursday expected to meet to consider the High Court’s decision before its Chairperson, Retired Justice Claudette Singh informs the president of its decision.