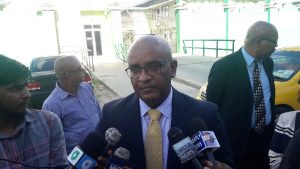 Bharrat Jagdeo briefing reporters outside the Ministry of the Presidency.

Opposition Leader Bharrat Jagdeo Thursday afternoon emerged from what he said were promising talks with President David Granger on appointing a new Chairman of the Guyana Elections Commission (GECOM).

“We had a relatively productive engagement”, Jagdeo said, adding that they both expected that it should be settled “in a matter of days”.

“We are hoping that with good-faith negotiations on both sides that we can resolve the matter of the new Chairman of GECOM,” he said.

After a more than one-hour long discussion, Jagdeo told reporters outside the Ministry of the Presidency that he and Granger agreed that he would use the 18 already rejected names.

In apparent reference to attorneys-at-law Christopher Ram, Teni Housty and Sanjeev Datadin, the Opposition Leader said a number of his nominees has been representing clients in a number of cases.

The two sides are expected to name representatives to discuss the nominees to be submitted. Jagdeo reiterated that it is his constitutional responsibility to submit the names to the President, but the Guyanese leader could still suggest names. “We are not averse to him suggesting names too but the constitutional responsibility to submit the names is that of the Leader of the Opposition and so the CCJ ruling did not change the constitution,” he said.

Jagdeo hoped that the appointment of a successor to retired Justice James Patterson could be made in a matter of days in accordance with the ruling of the Caribbean Court of Justice.

For his part, President Granger said their discussion focused on the means, not the nomination, to be adopted for the nomination for a GECOM Chairman. Granger noted that the appointment of the head of the seven-member commission is key to being advised on holding credible elections. “We feel that unless and until the chairman is appointed the work of the commission will not be able to move ahead as quickly as possible. Eariler in the year, as you know, we made it clear that we are interested in credible elections, but at the same time, we wanted to make sure that we operated on the basis of advice of the chairman of the commission itself,” he said.