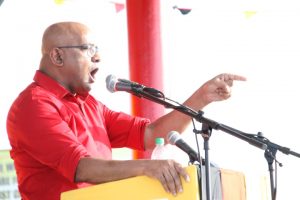 As Guyana’s governing coalition and the opposition remain at loggerheads over whether there should be house-to-house registration to create a new voters’ list, General Secretary of the People’s Progressive Party Bharrat Jagdeo brushed off suggestions that the existing voters’ list is more advantageous to his party.

Asked whether the PPP intended to fly in its supporters from overseas to vote if it gets to use the existing voters’ list, Jagdeo was evidently lost for words after which he said all overseas-based Guyanese whose names are on the voters’ list could vote.

“The thing is that if you are on the list as a Guyanese, you are eligible to vote. If you are on the list whether they are from Brooklyn or Queens or Jamaica or Barbados and they are Guyanese, they are eligible to vote,” he said in response to questions by Demerara Waves Online News. Instead, he questioned whether the governing coalition of A Partnership for National Unity+Alliance For Change (APNU+AFC) planned to disenfranchise Guyanese who are holidaying overseas.

Jagdeo disagreed that APNU+AFC’s key motive was to take eligible PPP supporters off the list, although they may “drop a few names” in the house-to-house registration process.

Quizzed on whether the PPP was adamant that the existing voters’ list should be used because it would be more advantageous, he argued that the voters’ roll does not matter but instead it is the policies that people would vote for. “The list doesn’t confer advantages. On the same list, APNU won several election. It’s not the list that confers advantage to a political party. It’s your policies and your hard work on the ground,” he said.

The Opposition Leader told reporters that he on Thursday informed President David Granger that he would be writing him about “falsehoods” that the voters’ list is bloated, contains more than 200,000 defective names and that youths would be disenfranchised if there is no house-to-house registration. “I said to him if the concerns are genuine and we want to treat your concerns expressed as President as genuine concerns about credible elections…that I would like to discuss at length to show you how we can have credible elections with just updating the list through claims and objections,” he said.

Jagdeo said he refreshed Granger’s memory that his party won a parliamentary majority in 2011, won the government in 2015 and the list was used to conduct two local government elections without question. “I said to him if the concerns are genuine we want to engage on them but if it’s just a ploy to delay the elections, then we are not going to make any headway,” he said.

Then Chairman of the Guyana Elections Commission, Retired Justice James Patterson had voted along with pro-coalition commissioners Vincent Alexander, Charles Corbin and Desmond Trotman that house-to-house registration should be conducted. GECOM, through its lawyer, has since told the Caribbean Court of Justice that a voters list produced from house-to-house registration would not be ready until December 25.

The Caribbean Court has already ruled that last December’s no-confidence motion was validly passed and that the Guyana Elections Commission ought to have been ready to conduct general elections within the stipulated three months.

In March, 2019, a Carter Centre mission had suggested that a list of non-resident people could be generated and used on election day to determine whether anyone has turned up to vote for them. The mission had said the National Registration Act that allows for the removal of emigrants from the voters’ list be used by the Commission. However, he said if they are in Guyana at the time of continuous registration, they could apply to be replaced on the list.