The Alliance For Change’s (AFC) endorsement of party leader, Khemraj Ramjattan, as its prime ministerial candidate for the governing coalition, will not be changed.

He made it clear that neither APNU nor AFC has withdrawn from the accord after the expiration of the 36 months and so it is expected to continue for the full 60 months unless one of the parties withdraws. “If we are in a coalition and we are governed by an agreement…the agreement currently says the Alliance For Change shall nominate a prime ministerial candidate. There is nowhere in that agreement (that) says that I’ll nominate a prime ministerial candidate who the coalition accepts or not,” he said.

For his part, Ramjattan believed that he got the nod over incumbent Prime Minister Moses Nagamootoo because he was right for the number two constitutional position as principal assistant to the President. “I suspect in the minds of large sections of the national conference membership, (“I’m) fit and proper for it,” he said. Asked what did he pitch to the delegates to convince them to support him, he said that he offered to “do a good job of it if I’m made prime minister and that was largely it”.

“I had spoken to a number of delegates and they had asked some very searing questions, quite frankly. I think I provided very good answers to them and that is what primarily caused them to vote for me,” he said. Reluctantly revealing the questions, he said they included what he would be doing in the areas of job-creation and constitutional reform.

“I think I provided good answers and I think that it has paid off,” said Ramjattan who was earlier Saturday elected as party leader.

A number of party delegates to the National Conference told Demerara Waves Online News that Nagamootoo had become unpopular because over the last three years in government, he had provided little assistance to ordinary people who had reached out to him.

Nagamootoo left before delegates were asked to support several consolidated motions calling for Ramjattan to be endorsed as the prime ministerial candidate whenever the next general elections are called. 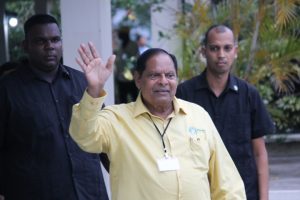 Concerns were raised among pockets of delegates about the AFC constitutionality of the process of picking a prime ministerial candidate on the grounds that it should have been done by the National Executive Committee and taken to the National Conference for ratification.

Patterson said the AFC’s constitution allows the party, in the interim, to call a special conference should the need arise but the party decided to do it now. “We have taken the opportunity to use this national conference,” said Patterson.

Sources also said that with the Caribbean Court of Justice (CCJ) set to next week rule on two important cases that would have implications for early general elections, it would have made no sense for the AFC to spend millions of dollars again to hold a special national conference to consider the executive’s proposal for a prime ministerial candidate. The next National Conference is scheduled for 2021.

Ramjattan described Nagamootoo’s posture towards him as “most gracious” and opted to leave to avoid being perceived as influencing the process as Prime Minister.

Meanwhile, Nagamootoo recalled that he had already withdrawn from all elected posts on the party’s executive and he did not see himself staying on as Prime Minister indefinitely. “I believe at some point in time, Nagamootoo will have to make way for someone and that, for me, is a perfect transition. I am not here as a dinosaur or an old boat dropping my anchor and stay there forever,” Nagamootoo said.

The Prime Minister believed that consideration of the endorsement of candidate for his post was bad timing because it would potentially send a signal that government was in election mode, ahead of the CCJ’s judgments on the validity of last December’s no-confidence motion and the constitutionality of President David Granger’s unilateral appointment of James Patterson as Chairman of the Guyana Elections Commission.