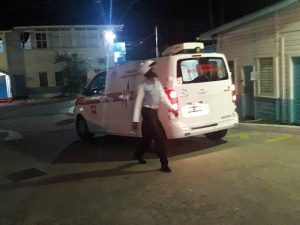 A traffic policeman passes the ambulance in the Georgetown Public Hospital compound. Guyana Fire Service responders were inside assisting the injured woman and a toddler who were struck down by a car.

A woman and a toddler were knocked down while crossing Brickdam, Georgetown, near Demico, eyewitnesses said.

A speeding car, driven by a woman, fled the scene after an angry crowd converged, persons at the scene said.

The pedestrian, believed to be in her 20s, was rushed to the Georgetown Public Hospital. She was surrounded by emergency responders of the Guyana Fire Service as she laid on a stretcher and wore a neck brace.

The whereabouts of the driver were not immediately known. She was not seen at the Brickdam Police Station.