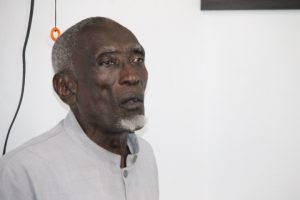 “When we can afford to go out there, we will go to see exactly what is happening and I doubt whether we can go more than once or twice per year but we would like to go to any factory onshore, ten, twelve times a year, a day or whatever it is but let’s understand the constraints and difficulties of getting out there,” he said.

He made the startling disclosure at a meeting between top officials of labour, immigration and social services bodies and several representatives of oil industry-related companies.

Asked whether there is an occupational safety and health representative on each drill-ship who interfaces with the Labour Department, Carryl said “I cannot answer you that at this point in time”.

In light of financial and other constraints, Carryl was pressed on whether there are representatives on a joint occupational safety and health committee. He responded, “we have not had any update from them in a while but we have people many times, we interface with the operatives out there who, whether they lie to us or not, is another matter.” 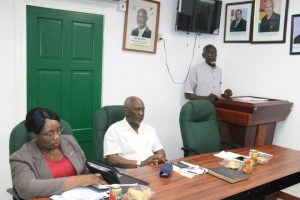 Left to Right: Head of Immigration and Support Services at the Ministry of the Presidency’s Department of Citizenship and Immigration, Carol Lewis-Primo; Junior Labour Minister Keith Scott and Labour Department Advisor, Francis Carryl.

Carryl told participants that under Guyana’s laws, the offshore vessels are legally considered factories to which all rules, and occupational safety and health, along with general labour standards, apply.

Adviser on Occupational Safety and Health, Gwyneth King raised eyebrows when she said she was unaware that oil exploration and production-related vessels were operating offshore Guyana.

Carryl added that it would be easier for Labour Department officials to visit large gold mines in contrast to the offshore oil and gas operations. 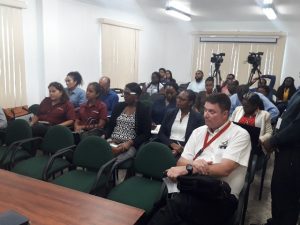 Representatives of contracting companies for the oil and gas sector meeting with officials f the Ministry of Social Protection.

The Department of Labour official said already representatives of ExxonMobil and local content providers have been called in and told that they must obey Guyana’s laws. “We’d have them know that these laws are sacrosanct in Guyana. I don’t care where you came from, you have to obey the laws of Guyana,” he said.

The Labour Department official sought to assure attendees that “we are not delinquent in any way” but “we are constrained by circumstances and cost of knowing first-hand what is happening out there”.