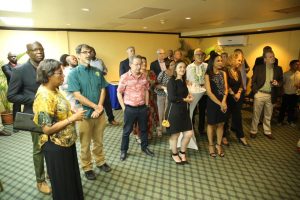 Attendees at the THAG reception in honour of recently-appointed Minister of Business and Tourism, Hemraj Rajkumar.

A three-year-old Tourism Development Fund (TDF) has raked in almost GYD$5 million that has been used in a couple of areas to help boost Guyana’s tourism product, but large hotels are yet to clear a hurdle to begin contributing to the vital cash source, President of the Tourism and Hospitality Association of Guyana (THAG) Mitra Ramkumar said Friday.

The TDF provides for subscribing hotels to charge guests an extra US$1.00 per night to help the industry finance capacity building, marketing and product development.

Ramkumar said the monies from the fund have been used to erect signs at the Botanical Gardens and Social Media marketing for THAG. Plans are in the pipeline, he said, to improve product development at places such as Fort Island in the Essequibo River, to ensure safety and improve standards. “Those are the areas that we want to focus the fund on,” he told Demerara Waves Online News.

He highlighted, at a THAG-organised reception in honour of recently-appointed Minister of Business and Tourism, Hemraj Rajkumar, that an independent committee was this year established to manage the TDF.

The THAG President said the TDF has garnered about GYD$5 million and his association hopes that more hotels and resorts such as Marriott, Pegasus and Princess-Ramada, would subscribe to the financing mechanism. “It’s an area that can really generate significant amounts of money to fund tourism if we can get all the hotels, big hotels, and we can double and triple that fund very quickly,” he said.

Ramkumar explained that the Marriott Hotel was contributing to the fund, but has since withdrawn until they can iron out the extra charge to corporate clients who pre-book rooms before arriving in Guyana. An information session is planned, he said, with the chief executive officers and general managers of the hotels. “We want to work with the hotels and the companies that use these hotels to let them understand the reason behind the fund—what the fund is used for. Once we get that message over, we believe that they will willingly contribute,” he said.

The association plans to continue pushing for tourism to be regarded as an export industry so that it could be granted similar concessions such as zero or reduced taxes as other industries are benefiting.

Guyana is recognised as the number one ecotourism destination in the world.

THAG was established in 1992 and is a member of the umbrella Private Sector Commission (PSC) and the Caribbean Hotel and Tourism Association (CHTA).

Previous: Occupational safety visits to Guyana offshore drill-ships too costly for Labour Department to conduct
Next: OPINION: “One foot in the grave”: The problem of maternal mortality