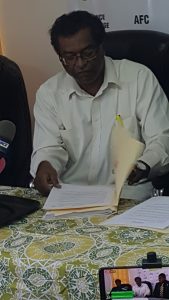 Fearing that the opposition People’s Progressive Party (PPP) has hired an American firm to post customised messages to Guyanese Facebook users’ accounts, Public Security Minister Khemraj Ramjattan has announced that the governing APNU+AFC coalition would ask that social media giant to block such messages that are calculated to rig Guyana’s next general election.

“That is why we are in the process; we’ll have to write the Facebook people, Mark Zuckerberg and so on not to put those ads on because that is terrible. It is going to influence our elections. It is going to, in a sense, rig our elections and although we have done all these things, sometimes people’s minds are going to break because of these advertisements,” he said Saturday night on Dave Television in New Amsterdam, Berbice.

Ramjattan accused the PPP of hiring the Washington-based public relations lobbying firm, Mercury Public Affairs, to target at least 45,000 Guyanese, who might have highlighted problems that they are experiencing or are disgruntled with the incumbent administration, with messages that might convince them to vote for the Opposition.

“So I want you all to understand, a lot of things will come on you all Facebook, especially those who are persuadable, lots of real big pieces of disinformation and misinformation and fake news to the extent to toss up your head…and they may do it in such a professional way…and then when elections come you don’t want nothing to do with the government that’s trying its best for you,” said Ramjattan who is also the AFC’s Chairman.

He said so far PPP General Secretary, Bharrat Jagdeo, who is also Opposition Leader, has not challenged the AFC’s account of what it believes Mercury Public Affairs would be used for.

Jagdeo has already said the GYD$34 million contract would see the company lobbying American decision-makers for free and fair elections to be held in Guyana and to counter several allegations that are being levelled against the PPP by the David Granger-led administration.

Despite reports that the British consulting firm, Cambridge Analytica, had said it had provided services to Guyana, the PPP and the governing coalition had denied hiring the firm for the 2011 and 2015 general elections.

Details of Cambridge Analytica’s work have not been made public, but that company had risen to global prominence last year when reports had surfaced that US President Donald Trump’s campaign had hired it to build targeted advertisements during the 2016 US elections using harvested data from 50 million Facebook users without their consent.