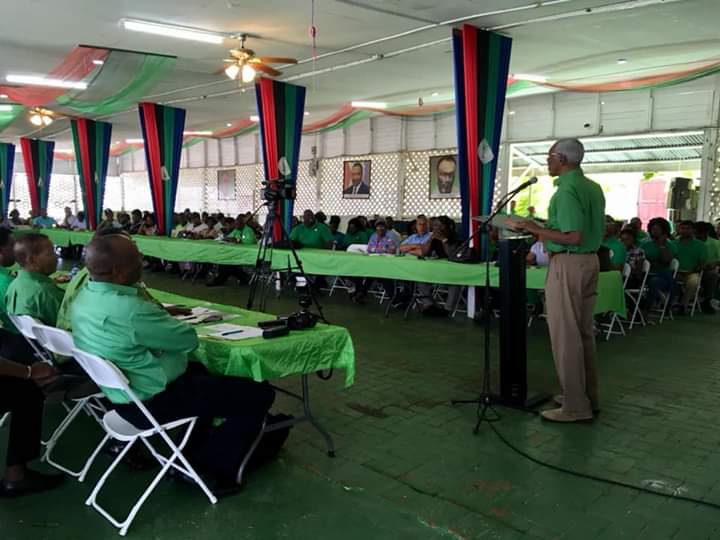 General Secretary of A Partnership for National Unity (APNU), Joseph Harmon says the upcoming general elections would not be easy, even as his party leader expressed confidence in regaining power.

“Mr. Harmon warned that these elections were not going to be a “cake-walk” and urged members to continue mobilizing and organising at the group, district and regional level to ensure victory”, the PNCR said in a statement after Saturday’s General Council, that party’s second highest decision-making body.

In the same statement, David Granger, leader of the Peoples’ National Congress Reform (PNCR), the largest APNU member, said he was confident the coalition would be returned to power.

“We are strong, the PNC is strong and the Coalition (APNU+AFC) will win the elections!” Granger was quoted as saying in a PNCR statement.

There is speculation that General Elections will be held this year depending on a decision by the Caribbean Court of Justice on the validity of the December 21, 2018 opposition-sponsored no-confidence motion.

Granger assured that his party has always been and is still a multi-racial party. He said that racialization had damaged the political fabric of the country. “The programme of the PNC is a programme for all Guyanese wherever they are. Race must not be used as an electoral factor,” the PNCR Leader said.

In the recent Cabinet shakeup to replace the dual citizenship ministers, Dawn Hastings is now Minister of State and Mervyn Williams, a PNCR loyalist, is back as a parliamentarian. Hemraj Rajkumar replaced Dominic Gaskin, as Minister of Business.

The PNCR has historically drawn the bulk of its support from among Afro-Guyanese.

In her address, PNCR Chairman Volda Lawrence called on all party leaders and groups “to endeavor to inform their constituents of the progress of the government, the value of our policies and their positive impact on the various communities across the country.”

Lawrence boasted of several achievements by the APNU+AFC coalition-led administration. “We have worked effectively for the past four years to reduce crime and corruption. In this period, extra-judicial killings have vanished, the sale of illegal drugs is being addressed; health care, education and social services have significantly improved and we have dealt congenially with the public. We have been honest, reliable and efficient and have willingly worked the long hours needed to advance the economy, develop and move the country forward and improve the lives of the masses,” she said.

For his part, the President, said the PNCR, identified several transformational changes. Some of the areas highlighted were local government elections, four new capital towns, the increase in salaries, wages and pensions, increase in teacher salaries, the drilling of wells in the Upper Takatu-Upper Essequibo Region, the many communities all across Guyana that were receiving running water for the very first time, street lights and a brand new road on the East Bank Berbice, buses, boats and bicycles to enable students to get to and from school, the Regional Broadcasting System — new radio stations in Bartica, Lethem, Aishalton, Orealla, Mahdia and Mabaruma, the decentralization of government services, ICT [information and communications technology] hubs and the Guyana Youth Corp. Granger said, “we (the Coalition has) improved the quality of life for the bulk of our population.”