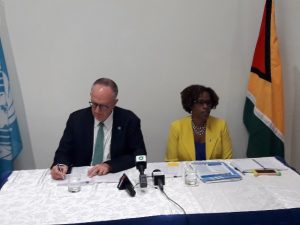 The Food and Agriculture Organisation (FAO) does not believe that Guyana’s emerging oil and gas sector will pose a risk to the country’s valuable agricultural sector once systems are put in place to ensure the two sectors co-exist.

The FAO’s Assistant Director-General for Latin America and the Caribbean, Dr. Julio Berdegué told a news briefing in Guyana that climate change poses the greatest risk to the South American nation’s agricultural sector, but he assured that technologies, climate-resilient plant varieties and strategies are available to cushion the impact of climate change.

Asked whether the oil and gas sector would not threaten the agricultural sector, Berdegué pointed to Mexico, Peru and Brazil as other oil-producing nations where large-scale agriculture is thriving.

“Yes, there are challenges but, of course, oil and gas and agriculture can live together and develop together. These are concrete examples from our region where these things do happen and happen well,” he said.

He reasoned that the oil and gas sector revenues might be used to finance large-scale investments in climate change adaptation or change the food systems to provide healthier diets. “These are not cheap things to do. These are significant investments over the long term and if the oil and gas economy goes well and if it is managed sustainably and in a responsible way, it can be a significant source of resources for this country to do the investments in the other sectors,” he said in response questions from Demerara Waves Online News.

Hesitant to describe the hydrocarbon sector as a threat to agriculture, the FAO official noted that perhaps labour costs in agriculture would increase to keep pace with salaries and wages in the oil and gas industry. He said the fishing sub-sector is expected to face the greatest risk for space in contrast to space for crops and animals. “There might be competition for space with the fishing sector, not so much with crop production or animal production,” he said, adding that there are similar challenges in Trinidad and Tobago.

Berdegué said Guyana’s Minister of Agriculture Noel Holder raised the issue with him in discussions and asked the FAO to provide support to grapple with the availability of offshore fishing grounds where there is a hive of oil and gas exploration and production activity. “How are we going to deal in this country with this new issue, brand new issue of allocating the seacoast of this country between different activities where before there wasn’t any competition for space?” Holder had asked him.

The FAO official said his United Nations agency is funding a US$15 million “very large project” for the Guyana Lands and Surveys Commission to strengthen the country’s capacity to manage its space – land, oceans. “We need modern regulations and modern technologies to manage our space in order to make these different economic activities – marine resources and offshore oil drilling – co-exist in a less stressful situation or in a more mutually-reinforcing situation,” he said.