PPP dual-citizenship MPs to resign, Adrian Anamayah will not renounce US nationality 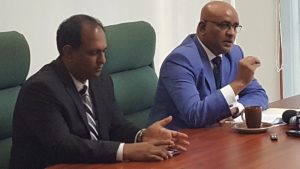 Opposition Leader Bharrat Jagdeo said his People’s Progressive Party Civic (PPPC) Members of Parliament (MPs), who are holders of dual citizenship, would be resigning and only one of them has informed that he would not be renouncing his American citizenship.

Jagdeo said that person is backbencher, Attorney-at-law Adrian Anamayah. “He has explained to me that there are family obligations and other issues so he will not renounce because of those commitments…,” he said.

The Opposition Leader added that PPP Chief Whip, Gail Teixeira and frontbencher, Odinga Lumumba would begin taking steps to give up their Canadian and American citizenship.

He said they last week informed the PPP’s Representative of the List, Donald Ramotar that they would be resigning as MPs and by next week they would submit their resignations to House Speaker, Dr Barton Scotland.

Jagdeo’s announcement came the same day that the Ministry of the Presidency announced that ministers Joseph Harmon, Carl Greenidge and Rupert Roopnaraine would be renouncing their US and UK citizenship. UK-born Dominic Gaskin would make good on his six-week-old plan to resign from the National Assembly as would the other three coalition MPs.

Government has also said they would be submitting their resignations to the House Speaker. The National Assembly is due to convene on April 11.

Guyana’s High Court and Court of Appeal have reinforced the fact that it would be a violation of Guyana’s constitution for persons, who swear allegiance to a foreign power, to become candidates or parliamentarians.