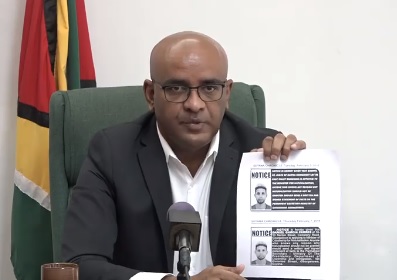 Opposition Leader Bharrat Jagdeo on Wednesday raised concerns about what he said were duplicate publications of photographs with different names and addresses of persons seeking Guyanese citizenship.

He flayed the Ministry of the Presidency’s Department of Citizenship and Immigration Services for what he believed were the registration of hundreds or thousands of foreign nationals as Guyanese as part of a racket or “other reasons”.

“People are given fake documents to influence any potential registration process,” Jagdeo said in apparent reference to ongoing plans by the Guyana Elections Commission (GECOM) to conduct house-to-house registration to create a voters’ list for the next general elections.

However, Minister of Citizenship, Winston Felix said his ministry had nothing to do with those publications. He said it is the applicants who interface with the newspapers.

The PPP General Secretary said the state-owned Guyana Chronicle was being used to publish the applicants for citizenship because that publication was not widely circulated.

The opposition People’s Progressive Party (PPP) has charged that such a registration was unconstitutional as it would exclude thousands of overseas-based Guyanese who might want to return home to vote. Jagdeo also feared that the incumbent coalition could, if it loses the next general elections, challenge the legality of the elections and cause the High Court to again rule that the general elections were null and void.

The Opposition Leader claimed there was a massive smuggling of people through Guyana. “This is a large-scale corruption and a racket, maybe hundreds or thousands paying for citizenship and they are brought in here for other reasons,” he said.

Jagdeo believed that the alleged racked was “just the tip of the iceberg”. “This is a pattern and it’s happening right before our eyes,” he said.

The People’s Progressive Party (PPP) had in the past, at the parliamentary bipartisan Committee on Foreign Affairs, expressed concern over the large numbers of Cubans and Haitians who had arrived here but there had been no evidence that they had officially departed the country.

Previous: Donna Mathoo among front-runners to replace Dominic Gaskin – AFC
Next: PPP dual-citizenship MPs to resign, Adrian Anamayah will not renounce US nationality