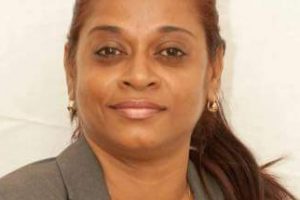 Leader of the Alliance For Change (AFC), Raphael Trotman on Wednesday confirmed that Donna Mathoo is being considered to replace Dominic Gaskin in the National Assembly.

“There are a number of persons, who are eligible; Ms. Mathoo being one of them and so, yes, there is active consideration of appointing her. Other names are also being considered and we will, in due course, make that announcement,” Trotman told a news conference.

Gaskin, a Briton by birth, is among four government Members of Parliament, with dual citizenship, who would soon be resigning from the National Assembly in accordance with Guyana’s constitution.

The party leader said the criteria for each of the candidates are competence, ability to represent the AFC, “levels or degrees of loyalty”, ability to attend sittings of the National Assembly due to incapacity, and overseas travel for study or other engagements.

“Looking at the near and longer term, we have to take several matters into consideration so it would not be at a particular person but across the spectrum. There would have to be set of criteria which I believe no one can gainsay or say would not be appropriate,”  Trotman said.

Mathoo, a coalition councillor in Region 6 (East Berbice-Corentyne), had been embroiled in alleged financial mismanagement at the Berbice operations of the state-owned radio and television station. She was subsequently cleared of fraud allegations and returned to work from a period of administrative leave.

However, Trotman and two other AFC executive members furiously rejected questions about whether he had overruled a largely consensus position that either Raynard Ward or Trevor Williams should fill Gaskin’s parliamentary seat.

Sources said there are lingering concerns about Williams’ late arrival at a Public Accounts Committee meeting from the Essequibo Coast back in 2012 that had led to the then government using its temporary majority to approve the promotion of Gitanjali Singh, wife of then Finance Minister Dr. Ashni Singh, as Audit Director of the Office of the Auditor General. Williams was also sidelined for overseas employment and more recently as a coalition representative on the Guyana Elections Commission.

Trotman made it clear that he and his colleague executive members were “shocked” and the discussions were captured on a recording. “Thank God that we recorded every minute of the deliberations and what you told me there. I would love to sit you in a room and you can listen to the recordings and see everything,” he said.

Cathy Hughes and David Patterson sought to scold the media about peddling falsehoods and declared that the question amounted to fake news. “Totally untrue, absolutely untrue,”, “You’re being duped with misinformation and fake news”.

“It’s absolutely unfair to publish what are blatant untruths so I’m only saying let’s be extra careful in this difficult time and let’s stay away from the rumours,” Hughes, a former media practitioner, said.

The AFC Leader denied there was rift between himself and party Chairman and co-founder, Khemraj Ramjattan or in that political organisation as a whole. “Despite what may be said, there is no rift between us and there is no rift within the party,” Trotman said. He said he was proud that the AFC does not make “unilateral, dictatorial” decisions.