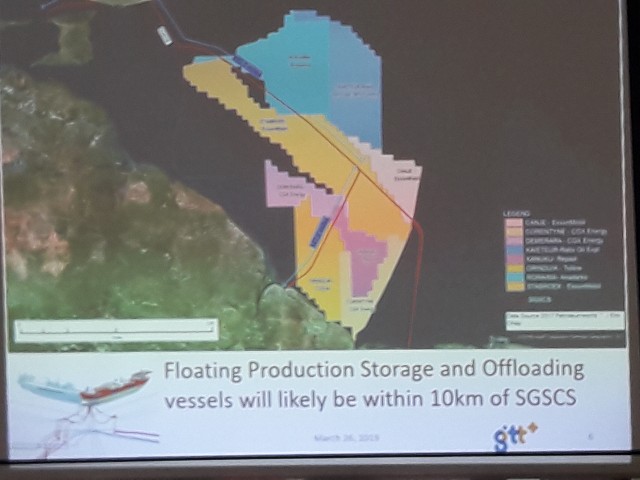 The submarine fibre optic cable running along the Stabroek Block

The Guyana Telephone and Telegraph Company (GTT) has established an oil and gas unit that is serving oil companies in the secure transmission of data through its submarine fibre optic cable, the company’s Chief Executive Officer Justin Nedd said.

“I can tell you we have an oil and gas unit that deals with the folks onshore,” he told a midday lunchtime lecture organised by the Guyana Press Association (GPA).

Nedd explained that the fibre optic cable is not merely providing public Internet services to companies like ExxonMobil, but secured private network capacity for the movement of big data. “They get lots of data… they bring it here, they could send it to Trinidad, send it to Houston (Texas) and it’s not necessarily over the Internet, of course, for privacy concerns because the Internet is a public network. The cable could also be used as a private transport network separate from the Internet,” the GTT CEO said.

With a growing demand for Internet and data amounting to 50 percent of its purchased capacity, Nedd hinted that GTT might have to invest another US$50 million. “What I foresee in the not-so-distant future is that the demand for data from the oil and gas sector especially is going to be so large that we probably would have to spend another 50 million (US) dollars to deal with the use of data in the oil and gas industry,” he said.

While ExxonMobil seeks non-objection confirmation (NOC) from GTT each time it conducts drilling on the Stabroek Block along where the submarine fibre optic cable runs, Nedd indicated that he was not worried about the frequent movement of oil tankers to and from the Floating, Production, Storage and Offloading (FPSO) vessel that would be anchored there.

“I think the cable would be the least of anybody’s worries… Oil is thicker than water. I don’t think the oil is going to get to the bottom of the ocean… I can’t see it being a problem but if we get an oil spill that’s not going to be our biggest worry because we have redundancy,” he said.