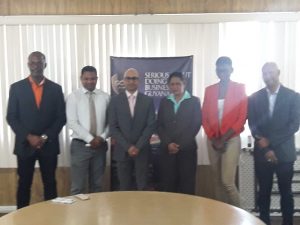 President of the Georgetown Chamber of Commerce and Industry, Nicholas Deygoo-Boyer flanked by his organisation’s executive.

The Georgetown Chamber of Commerce and Industry (GCCI) on Monday said Guyana was still gripped in political uncertainty over whether the Caribbean Court of Justice (CCJ) might rule that the no-confidence motion was validly passed and elections should have been held already.

“What happens if the argument that the no-confidence motion was validly passed is upheld and you pass the constitutional deadline for elections? So now you’ll have a successful decision, it would mean you should have (had) elections on March 21st. So what happens in that scenario? Because I don’t have an answer for it and that’s what causes me the uncertainty because when elections then (will) be held if you have that scenario come to fruition,” GCCI President Nicholas Deygoo-Boyer told a news briefing.

The Guyana Court of Appeal last week upheld, among the aspects of the High Court’s decision, that the President and Cabinet automatically stand resigned and the President and government remain in office as caretakers until general elections are held within 90 days. However, the passage of the no-confidence motion on December 21, 2018 was invalidated because the Court of Appeal found that its parliamentary approval required an absolute majority of 34 votes instead of 33.

Also of concern to the Chamber, the country’s oldest business organisation that dates back to 1889, is the call by opposition People’s Progressive Party Civic’s (PPPC) parliamentarian, Juan Edghill for government’s dual citizen lawmakers to resign from Parliament.

“I’m concerned that if the Opposition stands to raise arguments and does whatever they need to do and try to get dual citizens out of Parliament, that puts us back into a state of uncertainty… where I can’t plan easily,” Deygoo-Boyer said.

The Chamber President said businesses were finding it difficult to craft a two or three-year strategic plan and sign contracts amidst political uncertainty. He cautiously welcomed the Court of Appeal’s decision that upheld most aspects of the High Court’s decision.

The GCCI, he said, intended to lobby political stakeholders through the umbrella Guyana Private Sector Commission.

Commenting on Sunday’s announcement by Opposition Leader Bharrat Jagdeo that the PPPC would not be participating in parliamentary sittings until the CCJ’s decision, Deygoo-Boyer said doing so would not make a difference. “Given where the country is going and the partisanship, if you are in the minority, how much input are you really going to make so I see what their thought process is,” he said.

The GCCI has requested meetings with President David Granger and the Opposition Leader.