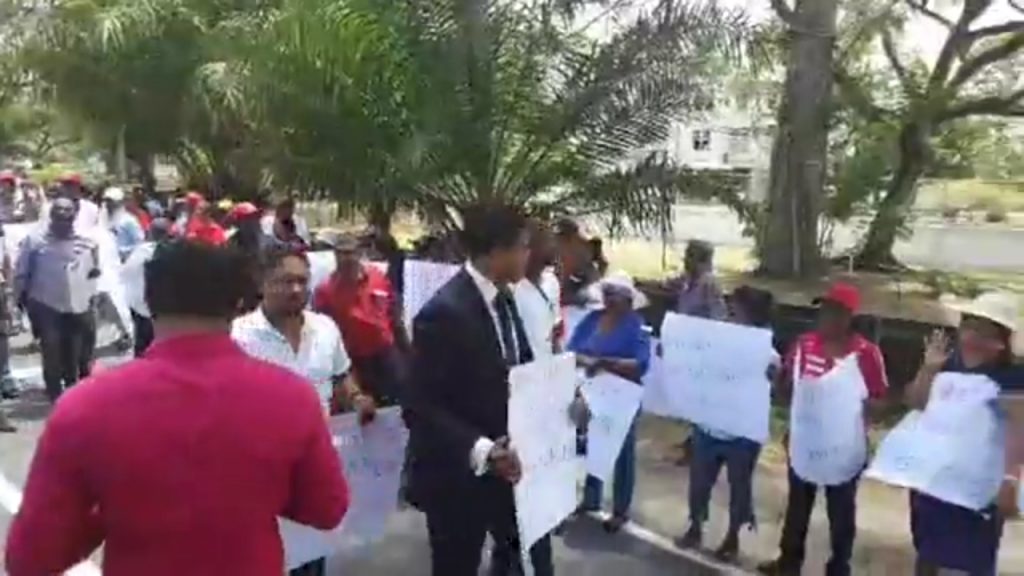 The People’s Progressive Party (PPP) on Friday began staging countrywide protests against what it says is an illegal government now that the 90 days have expired since the passage of the no-confidence motion and no elections have been held.

“The protests will go on sporadically because we want to target the President, Prime Minister and the ministers,” Opposition Leader Bharrat Jagdeo told reporters outside the Ministry of the Presidency.

The PPP maintains that the Granger administration is illegally holding office and has deliberately conspired with GECOM to prevent early elections — due this past Thursday — from being held under the guise of the need for house-to-house registration to clean up the voters’ list.

Among the chants were “Who must go?” — as hundreds responded with the surnames of the President, Prime Minister and ministers — “Illegal government must go!,” “What we want? Elections!”, “Get out, get out, out the place!” and “We want election now!”.

The protests come at a time when President David Granger is expected to announce a date for general elections within days after a Carter Centre delegation made efforts to end the stalemate over when the elections should be held and whether the existing voters’ list should be used or there should be house-to-house registration.

President Granger, through the Minister of State Joseph Harmon, earlier this week informed Jagdeo that he would be announcing a date in keeping with the recommendation from the Chairman of the Guyana Elections Commission, James Patterson. Jagdeo has since rejected any idea of holding the elections in late November 2019 after house-to-house registration is completed.

The governing coalition elections commissioner, Vincent Alexander, has said he was willing to consider the Carter Centre’s suggestion that a separate list containing the names of emigrants be created in collaboration with the Immigration Department of the Guyana Police Force to minimise the chances of substitute voting. Also on the table are enhanced measures to monitor the more than 2,000 polling stations countrywide.

The Guyana Court of Appeal is Friday afternoon expected to say whether it would overturn the High Court’s decision that the no-confidence motion was validly passed 33-32 in the 65-seat National Assembly on December 21, 2018.

The Carter Center noted that if the Caribbean Court of Justice (CCJ), Guyana’s final court of appeal, strikes down the no-confidence vote there would be no general election.