Secrecy shrouds ethnic relations watchdog’s payment for stage play, “I AM US” 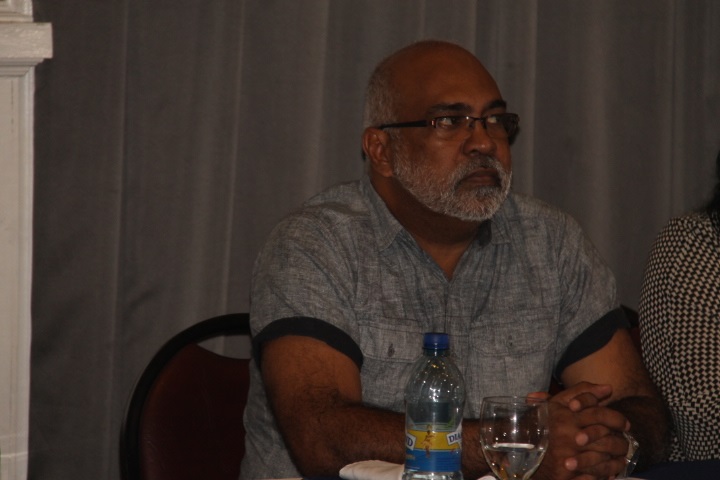 The Ethnic Relations Commission (ERC) dodged questions about how much money was paid for a stage play without possibly going through a procurement process.

Sources said as much as GYD$3.5 million was paid to ERC Commissioner Neaz Subhan, but he declined to comment on how much it cost the ERC for the play, “I AM US”, that he wrote in 2015. When pressed on what was the amount, Subhan went on the offensive over the relevance of the question, a sentiment upheld by ERC Chairman Reverend John Smith, at a press conference on Monday.

“Is that relevant at this time?” Subhan countered. Further grilled on whether he had been paid, Subhan indicated the need for adequate compensation for intellectual property. “In this time when we are talking about copyrights, shouldn’t artistes be paid?”

Subhan was also asked whether he had sold the play to the ERC. He essentially said that was a matter for that constitutional body. “What happens within the ERC, I prefer it stays in the Commission. If the Commission feels that they want to make it public, whatever arrangement was made, at the end of the day, as the author and writer and whatever arrangements were made, that was made within the confines of the ERC,” he said.

Subhan made it clear that he played no part in the decision-making process. “I recused myself from those decisions, that much I can tell you”.

One of the commissioners added that there are “certain things you can’t put out there for the public.”

The ERC is a constitutional body whose commissioners are nominated by the Clerk of the National Assembly and appointed by a parliamentary bipartisan committee.

The ERC’s formation lies in the Herdmanston Accord which was signed on January 17, 1998 by the then President Janet Jagan of the People’s Progressive Party/Civic and Hugh Desmond Hoyte of the People’s National Congress.

The Commissioners, drawn from a cross section of civil society, execute an array of functions under the areas of Investigative, Conflict Resolution, Education and Public Awareness, and Research.