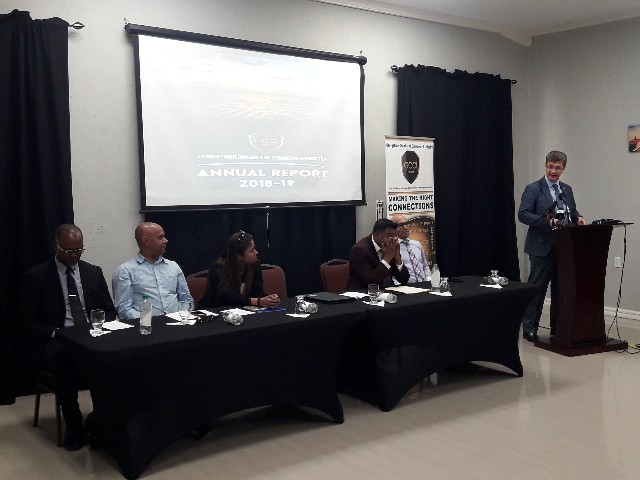 British High Commissioner, Greg Quinn, addressing the formal opening of the 2019 Annual General Meeting of the Georgetown Chamber of Commerce and Industry.

Britain on Monday called on Guyana’s political leaders to find a solution to resolve the looming political crisis as the 90-day timeframe within which General and Regional Elections should be held following last December’s no-confidence motion runs out on Thursday.

British High Commissioner to Guyana Greg Quinn made it clear that he was not about to interpret this country’s constitution.

Stressing that Britain has always supported free and fair elections in Guyana, an equal member of the 53-nation Commonwealth body, he urged a speedy resolution to the political impasse, while the Court of Appeal was to pronounce on the way forward.

“What I will say is that the clock is ticking following the no-confidence vote in December. A legal process is ongoing, I recognise that, but that clock has not been stayed. I therefore urge, indeed implore the political leadership of this country to get together and agree a constitutional way forward,” said Quinn in an address at the opening of the Georgetown Chamber of Commerce and Industry’s Annual General Meeting in Georgetown.

The Court of Appeal will Friday, March 22, the day after the 90-day period expires, begin hearing oral arguments concerning the Attorney General’s application for a stay and conservatory order of the High Court’s decision that Cabinet stood immediately resigned because the no-confidence motion was validly passed last December by a vote of 33 to 32.

The Court of Appeal is yet to set a date for its decision on one of the appeals of the High Court’s ruling, even as it is yet to begin oral arguments on Wednesday in a related appeal by private citizen Compton Reid.

Opposition Leader Bharrat Jagdeo has vowed not to extend the election deadline beyond Thurday (March 21), unless President David Granger names an election date and uses the existing voters’ list that expires on April 30. That list can be refreshed with a period of continuous registration, but the Granger-led coalition and its three elections commissioners prefer house-to-house registration to remove the names of deceased persons and emigrants before the next general elections. 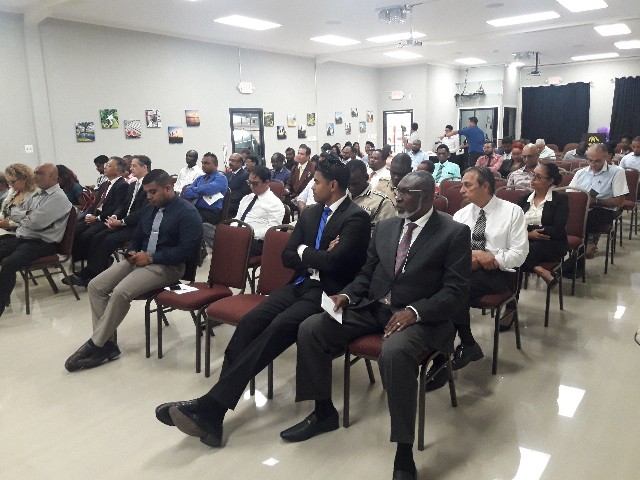 Attendees at the formal opening of the 2019 Annual General Meeting of the Georgetown Chamber of Commerce and Industry.

The British envoy expressed concern that if the political leaders do not find a way out of the stalemate, Guyana’s business environment could suffer.

“It is imperative this happens. If no way forward is found I fear there will be a further and more harmful impact on business and investment in Guyana. None of us in this room want
that,” he said.

The British High Commissioner said voters also have a responsibility to hold their elected officials to account for what they have done or are doing. He stopped short of urging Guyanese to vote for the best policies instead of racial preferences. “To not blindly follow one party because that has been what the family has always done, it is time to look to whomever has the best policies and best plans,” he said.