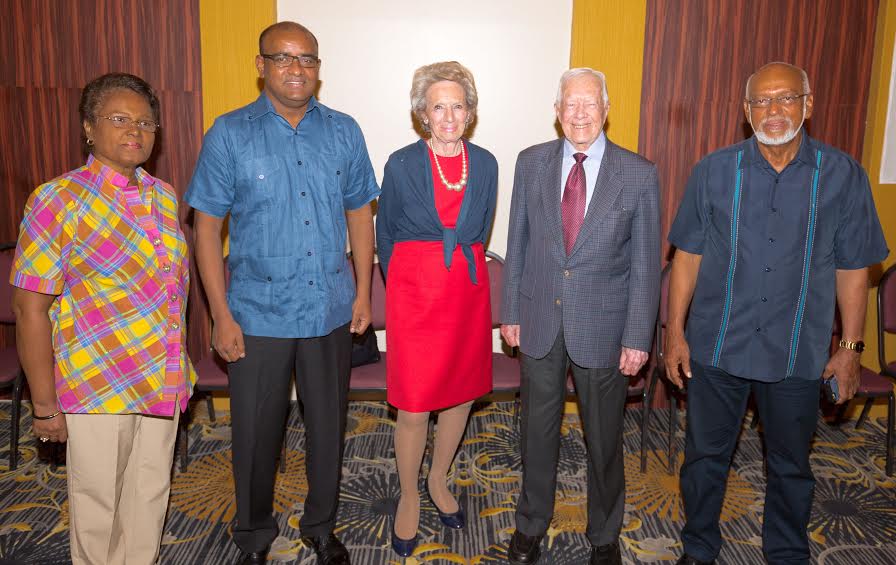 Opposition Leader Bharrat Jagdeo on Thursday disclosed that he and former US President, Jimmy Carter of the Carter Centre held telephone discussions last week, but the former Guyanese leader declined to give any details.

Jagdeo said he preferred to await another discussion with Carter after he and President David Granger had spoken. “I thought it’s necessary for Guyanese to know that I received a call and I spoke with him. I’d prefer to keep a little quiet about the contents at this point in time until I hear back from him as to whether he (had) in fact spoken with President Granger,” the Opposition Leader told a news conference.

Carter, Jagdeo and possibly Granger have spoken about three weeks after a fact-finding mission from the Carter Centre came to Guyana and held discussions with representatives of the governing coalition, the opposition, civil society and the Guyana Elections Commission (GECOM).

The results of that fact-finding mission have not been made public.

Meanwhile, the Opposition Leader welcomed remarks by newly-accredited US Ambassador to Guyana, Sarah-Ann Lynch that her country “supports genuinely free and fair elections”. “We are quite pleased about this as we were about other statements that emanated from different sources,” he said, in referring to comments by the British, European Union and United Nations envoys to Guyana.

Jagdeo, however, said he was quite surprised by Granger’s position that “we have to have mutual non-interference in each other’s internal affairs”. He questioned why Granger, as Opposition Leader, in 2014, had called for international sanctions against Guyana if elections had not been held or Parliament had not been reconvened to face the no-confidence motion. “Today he is lecturing about mutual non-interference in each other’s internal affairs,” he said. Jagdeo urged the President to examine the African Union’s pact that refers to non-indifference when there is a threat to the legitimate order rather than non-interference. 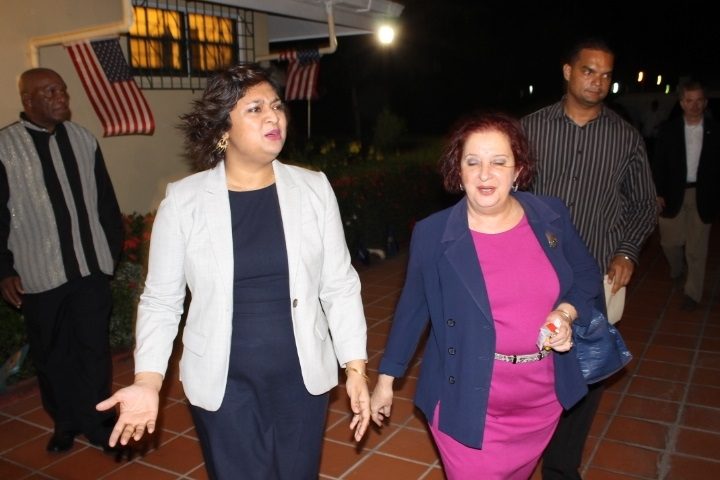 Jagdeo, on the other hand, was at pains to defend his call or tolerance for the international community, including countries and organisations, to get involved in Guyana’s political landscape.

“It was not the concern about the statement about local government elections that triggered  what may seem a hard response from the government at that time. It was the personal comments about President Ramotar and that we take strongly… The international community has always been involved in Guyana on the democracy front from the involvement of President Carter. Even President Bush at that time, and throughout, we have involved the international community. They have supported GECOM. Many of our democracy programmes have been funded by USAID and the Canadians and the others, they have supported the Parliament…,” he added.

“The international community has always been integrally involved in the democratic processes in Guyana so urging them to be involved now is nothing new,” he said.

President Carter, in 1990, had been instrumental in brokering with then President Desmond Hoyte and then Opposition Leader Dr. Cheddi Jagan key electoral reforms such a new voters’ list through house-to-house registration, a reformed GECOM and counting of the votes at the place of poll. Jagan emerged victorious at the 1992 general elections that had been certified as the first free and fair elections in almost 30 years.

While in government, then acting Foreign Minister Priya Manickchand had delivered what then Head of the Presidential Secretariat Dr. Roger Luncheon had characterised as a “feral blast” to then American Ambassador, Brendt Hardt at a US embassy reception for America’s Independence anniversary and walked out of the event. Manickchand had declared that the US has crossed the “red line” for finding numerous excuses for not holding general elections.

Jagdeo’s People’s Progressive Party (PPP) and its three elections commissioners have been pushing for general elections to be held with the current voters’ list that expires on April 30. However, the governing coalition and its three commissioners are supporting house-to-house registration to remove the names of deceased persons and emigrants.