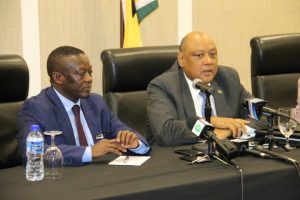 The Guyana Geology and Mines Commission (GGMC) is considering the commercial mining of gold using mercury-free recovery methods such as the one that South Africa is offering to provide this country, ministers from both countries said Wednesday.

Guyana’s Minister of Natural Resources, Raphael Trotman said he was aware that the GGMC has been discussing the possibility of becoming a gold producer rather than merely a licencing and regulatory authority.

Trotman said the idea being explored is for the GGMC to get into model mining that will use a recovery method other than mercury. Such an approach, he said, could be used for demonstration purposes and then  “scale it up” and also “bring in some profits”

“I don’t believe we are at a stage where we can be as South Africa is and say we own a large profit-making enterprise. I think we’ll have to start with model, perhaps  a mercury-free model, to demonstrate to the other miners how, not only how you can mine without mercury but how also how you can mine without mercury and still be profitable,” said Trotman.

In terms of government owning and managing a large-scale mining enterprise, the Minister of Natural Resources said that would require a “policy shift at a governmental level”. He noted that Guyana did not have a good experience in the 1970s and 1980s experiment with State production entities. 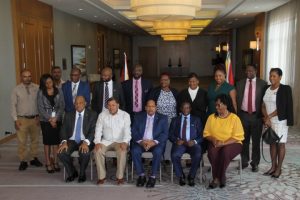 He said the GGMC and the Guyana Gold and Diamond Miners Association need to partner on the mercury-free mining initiative, and already that association has asked for 30 mining blocks.

The Guyanese Minister’s disclosure was made during a news conference he shared with visiting South African Deputy Minister of Mineral Resources, Godfrey Oliphant. Oliphant said South Africa was willing to  share its bleach gold recovery method as a cost-effective and equally efficient means of recovering the yellow metal.

“We use domestic bleaching, the product that you use at home, so what we committed to do earlier today was to say if we could send some of our officials to come and work with your miners here to show them how to do this because you can buy this here,” he added. Another option, he said, was to take a number of Guyanese miners to South Africa to observe the gold recovery system.

The Deputy Minister of Mineral Resources assured that his country has mastered the bleaching technology which is “very cheap” and “very friendly to the environment” and simple.

He said South Africa also has the technology to conduct deep-sea mining of gold, diamond and other minerals with minimum impact on the environment.

The South African and Guyanese ministers also explored the possibility of laying the groundwork for the eventual establishment of a gold refinery in Guyana for value added production. “We want to move towards not just producing raw stones and sending them out to be cut and sent back but perhaps jewellery manufacturing and even for technology,” he added.