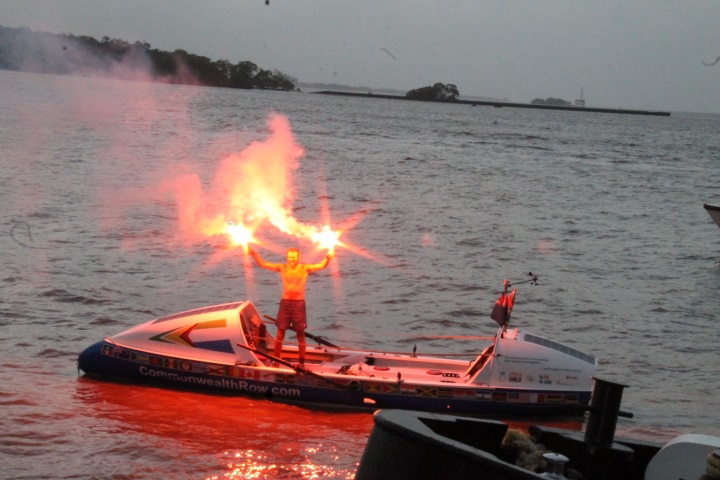 A former British soldier Wednesday evening ended a more than 3,000 mile long row across the Atlantic Ocean from Sierra Leone, West Africa to Guyana, South America to raise awareness about the 53-nation Commonwealth.

Former Royal Marines Commando of the British Army, Richard Allen docked at the Transport and Harbours’ Boathouse after the boat capsized at one time and a number of oars were damaged during the three-month journey. “For the last section coming around South America, it’s been quite dangerous because everything, from the boat getting smashed up, so at one point I lost three or four oars and at one point I was down to one oar but I had to try and stall anchor. I didn’t go ashore and make a new oar out of two separate bits,” he said.

Allen recounted that at one point he was separated from the capsized boat by about 1,500 metres.

After the boat, named “Tamu’kke”- the Patamona language of the Indigenous people of Guyana, which means “Together or United”- was escorted safely into Port Georgetown by Guyanese authorities,  Allen stood on the vessel and lit fireworks as a welcoming party and curious onlookers cheered. 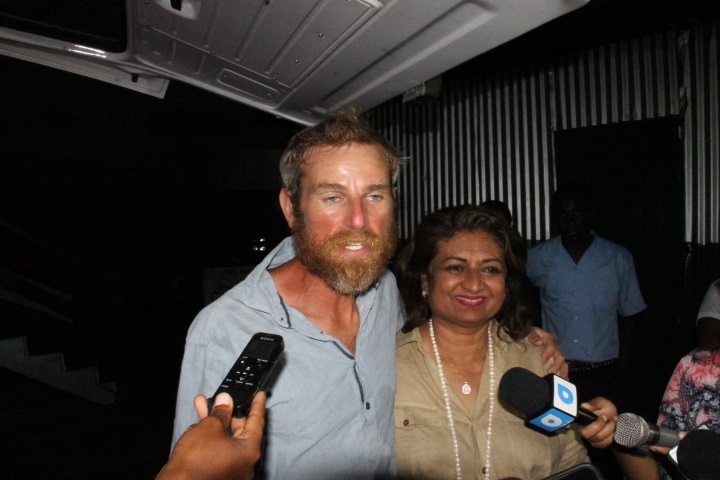 British rower, Richard Allen and Supriya Singh-Bodden of the Guyana Foundation speaking with the media shortly after his arrival.

He was not daunted and tapped into his military problem-solving survival skills to endure the journey from West Africa to the north-east coast of South America while remaining in the Commonwealth, the home to 2.2 billion persons.

“I think it did, especially the last section… With all the equipment breaking plus the boat getting capsized and lots of the equipment getting ripped off, me being separated from the boat in the middle of the ocean which wasn’t nice,” he said.

Boredom and an almost idle brain with “nothing to think about”, he said each day the mileage was different based on the wind.

The idea was birthed while Supriya Singh-Bodden of the Guyana Foundation was in London in November, 2018 and had a chat with Allen about his idea to row across the Atlantic Ocean. “When he walked in and we had this meeting. I said to him the Guyana Foundation welcomes this type of support but for me to say ‘yes’ to you, this is an extremely dangerous undertaking and I was more worried about what he was going to eat and what he was going to drink and he didn’t seem concerned in the slightest,” he said.

The Guyana Foundation representative said Allen’s row has drawn a lot of attention to her organisation’s work in community development and mental health. 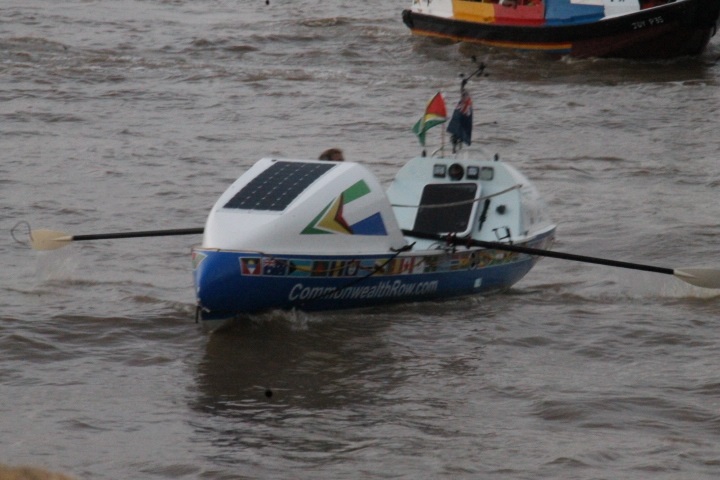 The row boat, named “Tamu’kke”- the Patamona language of the Indigenous people of Guyana, which means “Together or United”

After Allen was stamped in by an Immigration Officer and cleared by Customs, the bearded man was draped with the Commonwealth flag. From his home country, the UK, to other countries he highlighted the need to change people’s thinking about the organisation. “The Commonwealth isn’t about politics or politicians or anything like that. It’s all about people…and we should really be coming together to help each other,” he told reporters briefly before returning to a nearby ambulance for a medical check-up.

While in Guyana for the next three weeks, he plans to visit several schools and talk with students about the Commonwealth, an organisation of former British colonies and the United Kingdom.

On Thursday morning at about 11 O’clock he plans to row back to the mouth of the Demerara River and dock outside the Marriott Hotel where he is expected to be greeted by schoolchildren.

The Guyana Foundation says Allen was assisted on his journey by Simon Rowell, who is a Meteorologist for the British Sailing Team since 2015, and forecaster for the Clipper Round the World Yacht Race since 2011, to name just two of his posts. Simon lives and breathes ocean weather, racing and endurance. His knowledge of meteorology coupled with his ocean-going experience as winning skipper of the 2002 Clipper Round the World Race and the 2005 assistant race director gave Allen the best chance possible of successfully rowing the 3000 mile journey.