The presentation was done at an executive briefing which discussed the Police Reform Change Board and the New Guyana Police Force Strategic Plan.

No details were provided about the contents of the plan.

According to the agenda for the briefing, it was done to increase stakeholders’ awareness of certain key mechanisms aimed at enhancing the work of the security sector and improving citizens’ security. Citizens’ security remains a major concern not only in Guyana but throughout the Caribbean, and the implementation of this new plan is expected to boost the national capacity to tackle crime, violence and insecurity.

“The United Kingdom is committed to supporting this process, to supporting Guyana, in the change management of the police and the areas that we’ll be looking at in the future where additional support is necessary,” Combe said.

In his feature remarks, Minister of Public Security, Khemraj Ramjattan highlighted the need to have the implementation of the project expedited to avoid it being forgotten.

“You know, I find sometimes, we suffer an inertia as a result of being given the report. After that it’s on the shelf and sometimes we have this bad habit of not ensuring that which is on the shelf is utilised. We are not going to allow that to happen here.”

The minister also referenced a recent report which spoke to managing the force’s finances and urged the use of newer budgeting models, such as priority budgeting. 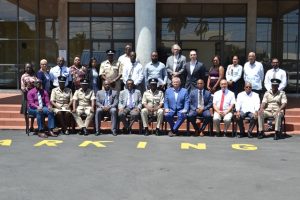 Members of the New Police Reform Change Board and other stakeholders of the security sector.

“There is also another priority as I see it, going through these reports and the various recommendations there, to introduce a medium-term financial plan, and this priority-based budgeting that I talk about, which focuses on funding of outcomes which deliver the greatest outcomes, for our force.”

Since its assuming in 2015, the Coalition Government has been working assiduously to ensure the advancing of the security sector. Thus far, its actions have proven to enhance the work of the Guyana Police Force as testimony through the reduction of serious crimes, crimes being solved, more officers being trained at local and international levels and, more importantly, the improvement of the relationship between the force and the public, the DPI stated.

Previous: “Significant” slump in business due to looming political uncertainty – Georgetown Chamber of Commerce
Next: Gold Board wants to buy “all gold” directly from miners