Gold Board wants to buy “all gold” directly from miners 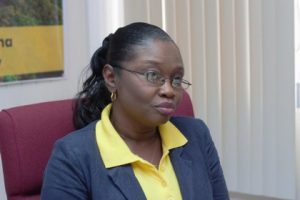 General Manager of the Guyana Gold Board, Eondrene Thompson.

The GGB’s main office is located in Georgetown and a satellite office in Bartica, in addition to agents who are licensed dealers. But Thompson said her entity wants to buy all of the precious yellow metal being produced here.

“However, for this year, 2019, we would like to ensure that we purchase all gold as part of our mandate so that the Gold Board will be embarking on some mobile buying. We’ll be going into the fields and purchasing gold from miners,” she said. 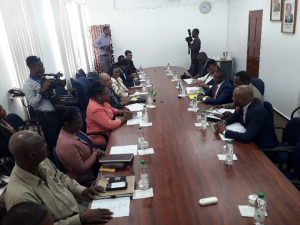 Thompson disclosed that the GGB decided to dispatch its own representatives to buy gold directly from miners because in many instances, it is too expensive for several miners to travel to Georgetown or Bartica to sell gold. She said a number of miners are also keen on selling their gold to the Board.

She added that the Board always ensures that Guyanese jewellers have sufficient metal for their craft.

Trotman was expected to explore with his South African counterpart’s strategies to combat some of the problems that Guyana is facing. “We have our own struggles in Guyana, which we will discuss in private, and we do need some guidance from you on how to manage some things and some of the things we are dealing with you have dealt with and countries like ours need good examples of how things could be done without a sense of chaos erupting and crisis and people telling you that you can’t manage your own country,” said Trotman.

The Guyana Gold Board has been moving to maximise its gold purchases instead of depending to some extent on private gold dealers, a number of whom the Guyana government had said had not been fully repatriating their foreign currency earnings into the Guyanese economy and causing a shortage of foreign currency and a further decline in the value of the Guyana dollar.

The Guyana Gold Board, Geology and Mines Commission and the Guyana Forestry Commission are among the key entities under the umbrella of the Ministry of Natural Resources.